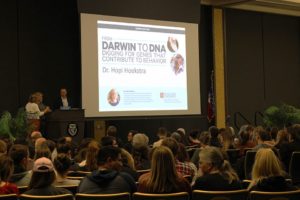 Duquesne University and the Bayer School of Natural and Environmental Sciences celebrated Charles Darwin’s birthday with its annual Darwin Day event on Monday, Feb 11. The event takes place in honor of the scientist’s most important works, most notably his theory of evolution by natural selection. Evolutionary biologists are invited to the event each year to present their research to a public audience.

“[We] have been putting on the annual Darwin Day event since 2004, when Professor David Lampe started the tradition,” Professor Michael Jensen-Seaman in the Bayer School of Natural and Environmental Sciences said.

This year’s lecture, titled “From Darwin to DNA: Digging for Genes that Contribute to Behavior,” focuses on the connection between DNA and evolution. This connection is a set of data that was unavailable to Darwin at the time of his research based on the existing technology of the 19th century.

The speakers at the annual event vary in their focus areas, but have common attributes that Lampe and Jensen-Seaman search for.

“We strive to bring in a speaker who is a prominent researcher in evolutionary biology. [We also] try to get someone who can effectively communicate with the general public,” Jensen-Seaman said.

This year’s lecture was presented by Hopi Hoekstra, the Alexander Agassiz Professor of Zoology, Molecular, Cellular, Organismic and Evolutionary Biology at Harvard University. Hoekstra’s research focuses on how variation is generated and maintained in natural populations through natural selection.

Genetic variation in populations can yield advantages to certain individuals that allow for them to be selected for more frequently than their peers. Examples of this can be seen most simply through visual characteristics.

“Our lab has been working on this for many years, and now have many examples of simple gene mutations that affect diverse traits, like certain coat color variations in mice which allow them to better blend into their environments,” Hoekstra said.

Evolutionary biologists of different disciplines focus on different animal species, known as model organisms, depending on which species best fits their research. For Hoekstra’s research in behavioral genetics, wild deer mice serve as a consistent model to observe.

“My lab uses wild deer mice as a model and capitalizes on their natural variation in behaviors,” Hoekstra said.

“We study burrowing because it is relatively easy to measure, varies tremendously between species, affects survival and its genetic basis is quite tractable,” Hoekstra said.

Hoekstra’s focus on wild deer mice behavior is particularly unique because of the difficulty that is associated with the genetic basis of behavior. The majority of data Darwin collected in the 19th century was based on qualitative and visible observations as the technology available did not include genome sequencing.

“Darwin had lots of observational and experimental evidence for population variation and how that variation affects fitness. He couldn’t know, however, how traits were passed down across generations as it was around a century before the discovery of the DNA double helix,” Hoekstra said.

Hoekstra’s lab researches the complexities that are found with traits that are passed down both in the wild and in the lab when directly manipulated through hybrid breeding between mice of different burrowing habits.

“My talk focuses on how we can now identify the DNA genes and mutations that give rise to differences in fitness-related traits – that one missing piece in Darwin’s theory,” Hoekstra said.

Studying this complex form of evolution provides insights into biological processes affecting all individuals, including humans.

“The innate behavior of burrowing in wild deer mice helps to explore the genetics and neurobiology of evolution. Studying the neurobiological evolutionary trends in the mice can shed light onto the genetics of human behavior,” Hoekstra said.