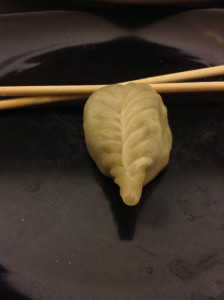 It’s not often that an Asian restaurant can find the balance between being a dine-in and delivery restaurant. But Everyday Noodle, located at 5875 Forbes Ave, does just that. The cross between convenience, quality and affordability makes the restaurant a great choice for lunch or dinner.

I went to Everyday Noodles on Monday with a friend. When we entered the dining area my eyes were immediately drawn to the window that went behind the counter to where the food preparation was done. During dinner hours, the cooks prepare the dough for all of the noodles.

On the table was a cup full of menus and pencils allowing customers to fill out the menu to ensure complete accuracy. It is also permitted to simply place your order orally. Walking back to our table, a pair of chopsticks laid waiting. When I saw the chopsticks, I immediately began to perspire. I have never used them before and I am not that great with forks and knives to begin with. Rest assured, there were common utensils aswell, but the challenge proved to be worthwhile as I started to perfect my skills with the wooden utensils and by the end. I felt like a pro.

For an appetizer, we got crispy peanuts Taiwanese style. There were delicious, but they were just salted peanuts and didn’t really impress.

For my entrée, I was drawn to the spicier options. I decided to go for shrimp, pork and vegetable wontons with mung bean noodles, Szechuan style. When I bit into the first dumpling, it was like a fiery explosion in my mouth.

The harmony of the sauces and meat along with the dumpling itself was astounding. The noodles were good and had a strong punch of spice to them. I also decided to order Taiwanese style sesame cold noodles. The noodles were delicious and the small slices of chicken were evenly proportioned so that they did not overwhelm the taste of each bite. The combination of cucumbers along with the other components was what really made the dish pop because they added a crunch and absorbed some of the flavor to make the bite more even. There wasn’t a single bite that was overwhelmed with too much sauce.

My vegetarian friend was worried because his options were limited. He was relieved to discover that all of the limited options looked really appealing. He decided on the vegetable dumplings. They were really the star of the meal. Served in the same wooden container that they were steamed in which meant none of the flavor or aroma escaped. The biggest component of the dumplings was spinach. There were also cashews, cheese, mushrooms and seasoning. The flavors blended together and the dumplings were extraordinary.

The service was great and the food was quick to come after we ordered, although that could be the result of our odd dining hours (we arrived at 4:15 p.m.). The ability to watch the food being made was a good treat to accompany the meal and on top of that, it was extremely affordable. 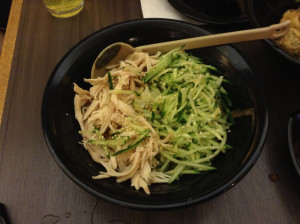 My two entrées only cost $15 and my vegetarian friend, who was kind enough to pick up the appetizer, only paid a little over $10. There are only a few entrées that are even over $10.

Everyday Noodles was a great choice for any lover of Asian cuisine. They offer well-done, affordable meals whether you want to sit down or have it delivered.