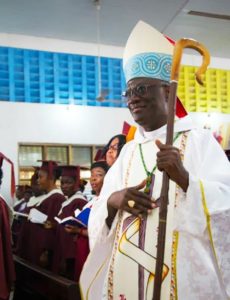 Despite the 13-hour plane ride it would take to get from Pittsburgh to Ghana, the Duquesne story is intertwined with the people and history of the country.

On Jan. 2, a former Duquesne assistant professor of theology, the Rev. John Bonaventure Kwofie, was recently named Ghanaian Metropolitan Archbishop of the Catholic Archdiocese of Accra by Pope Francis.

Kwofie is set to take canonical possession of the archdioceses in Accra, the capital of Ghana, within the next two months.

He was first ordained a priest in 1988 as a member of the Spiritan Congregation. He did pastoral work throughout Ghana following his ordination. However, in 2013 he began his journey at Duquesne as an assistant professor of theology. Kwofie taught a course on biblical and historical perspectives to undergraduate students, which explored topics relevant to today.

In 2014, he left Duquesne to take the position of bishop of Sekondi-Takoradi, and now has been re-named as Archbishop of the Archdiocese of Accra. Kwofie has been chosen to replace the Rev. Charles Gabriel Palmer-Buckle, who is now the Archbishop of Cape Coast in the Central Region, according to the Ghana News Agency.

Two current professors of theology at Duquesne, the Rev. Fr. Emmanuel Abbey-Quaye and Daniel Adjei, both share similar feelings towards the election of Kwofie.

“Archbishop elect, Bonaventure J Kwofie’s election personally came with a mixed feeling. As a Duke, it was an exciting and proud moment to tell people that a son of Duquesne university has again lifted the banner of glory in the history of the church in Ghana. As a priest from his diocese, I looked back at the positive changes and swift developments his leadership has brought into the diocese and asked myself who can step into his shoes,” said Adjei, a priest from Kwofie’s diocese in Ghana. “He is a true shepherd who cares not only for his priests’ welfare but the faithful of God. His display of faith, belief in providence and action made him work extremely hard, visiting every corner (even the remotest part) of the diocese of Sekondi-Takoradi.”

The Rev. Fr. Emmanuel Abbey-Quaye is a current professor of theology who was encouraged by Kwofie in 2016 to study Systematic Theology at Duquesne.

“Since becoming bishop of Sekondi-Takoradi from September 2014 till now, he [Kwofie] has been hailed as a visionary leader and a great administrator who has brought tremendous transformation to his diocese in terms of a pastoral plan, development projects and training of personnel,”Abbey-Quaye said.

The Spiritans have sustained a missionary presence in Ghana for over 150 years. Duquesne created plans for maintaining and growing its relationships with Africa. Duquesne is the only Spiritan university in America, and their mission encourages serving of the poor and suffering while establishing understanding and justice.

“I remain optimistic that he is going to be a good ambassador of our university in his new position,” Abbey-Quaye said.

This work is done throughout the world, but recently Duquesne has stressed the importance of growing and maintaining relationships in Ghana. One of the goals listed in the 2018-2023 Strategic Plan is to “solidify our rich existing relationships in Africa.”

“I think that his appointment is good news of great joy for us here at Duquesne University in the sense that one of our own has been elevated to such a high position in the Church as an archbishop,” said Abbey-Quaye. “We need to be proud of him and of ourselves and continue to pray for him to be a good leader and a humble servant in the Lord’s vineyard. Congratulations to him once again and we wish him the best of God’s blessings in his new episcopal ministry.”

“[Kwofie] has made me proud to be a Duke and a priest from his diocese,” Adjei said. “His good works will follow him and we wish him well in his future episcopacy. ”

Duquesne each year also has a Maymester study abroad trip to a different region in Africa. Last year the trip went to Tanzania, and this year the trip will be going to Ghana.