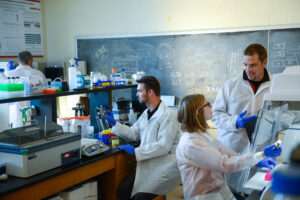 Imagine having the ability to change your eye color, your strength or make yourself glow in the dark. Imagine having the chance to cure fatal diseases or edit your own DNA. It sounds like a typical child’s fantasy dream. However, with modern science and technology, through genome editing, these fantasies are becoming a reality.

Genome editing, also known as gene editing, is becoming a relevant yet controversial topic in society. Gene editing is the use of modern technologies that gives scientists the ability to edit genetic mistakes. This can be done by adding, removing or replacing specific genetic material in a genome sequence, or, in shorter terms, changing the DNA. This phenomenon is possible through the existence of CRISPR-Cas9 (Clustered Regularly Interspaced Short Palindromic Repeats).

The founder of CRISPR-Cas9, Jennifer Doudna, explains that the CRISPR technology “allows scientists to make changes to the DNA in cells that could allow us to cure genetic disease.” The protein, Cas9, enables the ability to seek out, cut and degrade viral DNA. Doudna compares this protein to “a pair of scissors that cuts the DNA, making a double-stranded break in the DNA helix.”

Some of the repairs that this process can achieve include the correction of mutations such as sickle cell anemia, Huntington’s disease and even cancer.

Although this specific type of genome editing sounds like a scientific dream come true, it raise ethical issues. Not only can this process be used in adult cells or organisms, but also in embryos of organisms. CRISPR is giving the human race the ability to alter or design plants, animals and children however they may please. This idea is mind blowing, and in many cases, gives scientists the opportunity to rewrite the book of life itself.

CRISPR-Cas9 gives the ability to enhance human properties such as stronger bones, less susceptibility to cardiovascular disease and desired things such as to be taller, more intelligent or even change eye color. These changes can be brought to reality, and are actually irreversible. Changes made to genes in germline cells will eventually be passed down to future generations. Is this the life that we want for the future of the human race?

Although scientists have taken a “global pause” to carefully consider the ethical aspect of this technological advancement, it is happening in the present, and is no longer science fiction. This puts the human race in a position to consider the personal and societal impacts of a scientific breakthrough. The ability to cure fatal diseases is one that most scientists agree is an improvement. However, using the gene editing technology to improve physical and mental enhancements will only lead to chaos in the human race.

Another aspect and controversial idea relating to gene editing is the concern that it will only be accessible to the wealthy. If CRISPR is an expensive commodity, the wealthy will inevitably have the unfair advantage in the economic competition of availability of the gene editing. This will only heighten the societal reality of the rich having advantages in most aspects of life.

Scientific technology is only getting more advanced over time. The era of life changing opportunities for humanity is finally upon us, and we have to learn how to adapt to the changes in a way that will benefit us all as one unified human race.