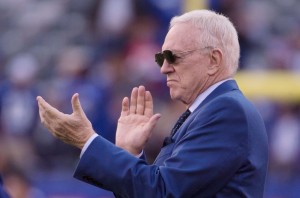 For those who regularly pay attention to the world of professional football, the name “Jerry Jones” should ring a resounding bell. Jones – multibillion-dollar executive who made his fortune off of oil and gas ventures – is the owner of the Dallas Cowboys football club. He is also an integral piece in how the team operates both on and off the field.

While primarily known for being hardworking and business savvy, not much can be said about the type of morals Jones holds. The former college football standout has often been criticized for the lack of empathy shown to former employees like ex-Cowboys head coaches Tom Landry and Jimmy Johnson.

Recently, Jones angered both media and football fans alike with statements about one of his current employees, linebacker Greg Hardy. Jones praised Hardy, a convicted domestic abuser, after the ex-Pro Bowler lost control on the sidelines during the Cowboys’ October 25 game against the NY Giants.

After the Cowboys gave up a game-winning touchdown late in the fourth quarter of the interdivisional matchup, NBC cameras caught Hardy shoving Dallas’ special teams coach Rich Bisaccia on the sidelines. After slapping Bisaccia’s playbook to the turf, Hardy then confronted injured teammate Dez Bryant in a shouting match.

Members of the media took wind of the debacles and were quick to question both Jones and Hardy after the game. While Hardy answered nearly every question thrown at him with a “no comment” or a “next question,” Jones was prepared to defend his star backer.

When questioned about Hardy’s child-like behavior, Jones told NJ.com’s Steve Politi that Hardy is “one of the real leaders on this team and he earns it and he earns it with respect from all of his teammates and that’s the kind of thing that inspires a football team.”

By making these statements, it’s clear Jones doesn’t know what a “real leader” is. For instance, a real leader doesn’t abuse their spouse, attack a superior or throw a tantrum during work.

New York Jets wide receiver Brandon Marshall didn’t appreciate Jones’ statements and called him out for not taking the time to address Hardy’s situation in an honest manner.

Marshall’s message to Jones is wonderful as it identifies the problem and helps provide an answer to said issue. Marshall himself has been involved in domestic violence situations as well as locker room confrontations, but he credits his recovery to teammates and staff that sat him down and helped him understand the gravity of his situation.

Maybe Jones is trying to boost Hardy’s demeanor by giving him a pat on the back and shielding him from the media, but what he did two Sundays ago deserves no reward. Jones, as well as the coaching staff and the rest of the Cowboys’ personnel needs make more of an effort to help cool Hardy down.

Hardy was injured last weekend against the Seattle Seahawks, which may be for the best as it will give him time to rest both his body and mind.

Housewives and Zombies: A look at the ‘Santa Clarita Diet’

February 12, 2017 The Duquesne Duke Arts & Entertainment Comments Off on Housewives and Zombies: A look at the ‘Santa Clarita Diet’

By Liyang Wan | Staff Writer The main limitation of films or television shows that rely on zombies is their lack of humanity. Traditionally, zombies walk unconsciously in crowds and eat human beings as opposed to, […]

April 11, 2016 The Duquesne Duke News Comments Off on The Duke, Off the Bluff win 2016 Mark of Excellence awards

For the first time in several years, the staff of The Duquesne Duke took home multiple Mark of Excellence awards from the Society of Professional Journalists. The awards recognize the best in student journalism by geographic […]

By Casey Chafin | The Duquesne Duke After receiving hundreds of dollars in fines for parking on campus between 2 a.m. and 5 a.m., Duquesne commuter students are awaiting a response from the Office of […]