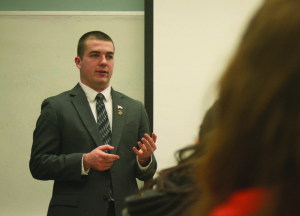 In 2010, Matt Burnett founded Pure Thirst, an organization that is dedicated to providing clean water to those who do not have access to it. The junior supply chain management major’s organization raised $33,000 in 2011, Pure Thirst to install a water filtration system in El Haral, Honduras. Having just finished raising $22,000 to install a system in Agua Caliente, Honduras, Matt and his organization are preparing for a trip to Honduras over spring break.

Q: In your words, what is Pure Thirst?
A: I think Pure Thirst is an outlet for students to use their skills and their area of study to give back on a global scale and really make a positive impact on individual’s lives. We’re going to have other opportunities in the future for them to possibly go on mission trips and install systems as well as partake in fundraisers and other events of that nature.

Q: What caused you to start the organization?
A: Well, it’s kind of a funny story, I was reading the newspaper back in 2010 one day and I read an article about a doctor in DuBois, Dr. Rice and he had a foundation, the Rice Foundation, and this foundation would go to Honduras and do medical mission trips and one of the projects that they did was build a water filtration system. And whenever I read that, I was really confused because I wasn’t aware that that was a problem in the world. When I did a little more research on it I found out that one out of every ten people in the world lack access to clean water and this can lead to dehydration, diarrhea, parasites, a lot of terrible things and every 20 seconds a child under the age of five dies because of this. And that just struck [me] that we have the technology to do something, it’s just people have to take the initiative. So that’s what I kind of tried to do back in 2010 and 2011. With our first project, we were able to raise roughly $33,000 and go to Honduras and actually dedicated a system down there and that’s kind of been my motivation, actually seeing how the community reacted and how thankful they were, to keep pushing forward with this.

Q: What was it like going to El Haral and dedicating the first water system that your organization purchased?
A: We went in June of 2011 and it was probably one of the most life-changing experiences that I’ve had. We went down and worked with the community to actually install the system, we did painting, we did the roofing for the system as well as some landscaping, and just being able to interact with them and to see how willing they were to help us with this. And also some of the personal experiences as well – on Wednesday of our trip there were these three kids that came down to help us. Their moms were at a women’s retreat, so they came down and hung out with us for about four or five hours and we were able to play baseball, and they never played baseball and they didn’t speak English either so there were some culture barriers there. But you were almost able to surpass those because of the connection that we had with them. Just being able to see that this is the face of the water crisis – like, say that we had not gone and raised the money for this system. Who’s to say that one of those kids wouldn’t have gotten a parasite and passed away if we hadn’t done that. So, kind of keeping that in my mind is something [that] I uphold. At the dedication on Thursday, seeing hundreds of people there just to say thank you and praising God that we were able to help them with that is something that seems like an easy task for me and the people involved but for that community it was life-changing.

Q: You recently completed fundraising for the water filtration system in Agua Caliente.
A: With the $22,000, it included a number of different fundraisers. We did the Water Walk in September, which we were able to raise $1,000 that way. We’ve also had a number of high schools in the area do fundraisers for us. I’ve spoken at a number of Rotary clubs and Rotary has been fantastic with their contributions; Rotary presentations on the larger scale of the district have helped us raise some money as well. And bringing everyone together for one common goal is pretty much how we did it.

Q: Once the Agua Caliente water filtration system is installed and dedicated, what’s next for Pure Thirst?
A: It’s hard being a college student and having school to worry about and APD [Alpha Phi Delta] to worry about and the Navy and all these things. I kind of have to assess’ “is this something that I can put time into,” and I think that every time I’ve gone down there I’ve come back really motivated, so I’m hoping I have the passion to continue on. We have fundraisers planned and while we’re down there I’d like to visit one of the communities around that area and see first hand what that community is struggling with, because I think that that will enable me to paint a much clearer picture for the people that I speak to up in the states about the crisis and hopefully be able to help that community as well.

–This interview has been edited and condensed.