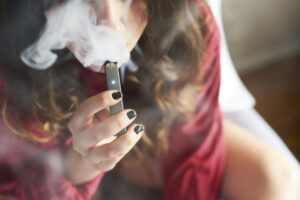 I leave my comfy apartment in the morning to head to class, and on my peaceful walk to College Hall, I am attacked by a familiar smell that gives flashbacks to standing awkwardly at parties as a freshman in college. What a way to wake up in the morning.

I first remember hearing about Juuls and seeing them my first semester of college. Back then, I went to Penn State University . Not many people I talked to had them, but one of my friends at the time did. He constantly had it with him and before anyone knew it, it was a new fad.

I always thought they looked kind of stupid, to be honest. Juuls look like flash drives and something about smoking a USB doesn’t look attractive. However, I will admit that I tried it a few times, especially in social situations. Personally, I never got the big deal about it, and once I transferred to Duquesne, I never did it again. And I’m glad I didn’t.

In recent weeks, news reports have emerged about teens getting sick from vape-related causes. I always thought that putting anything into your lungs would have consequences, but Juul and other vapes are marketed to be a healthy alternative to cigarettes. So even though I figured it was unhealthy, it is almost surprising and definitely alarming that youths are already seeing the effects of Juuling.

The New York Post reported on Sept. 5 that an 18 year-old from Illinois was hospitalized due to constant and uncontrollable vomiting from the effects of Juuling. The teen disclosed that his lungs look like those of a 50 year old, despite his young age. Fortunately, the teen is doing better, but there have been multiple cases just like this one, including those resulting in death.

Teens are not the ones to be blamed or scrutinized in this situation. Although the developers of Juul claim that the product is aimed at adults who smoke cigarettes, this does not seem to be the reality. There are many marketing techniques Juul employs to make the product appeal to the younger generation.

First, think about the flavor pods. Mint, mango, and fruit are just three. Others like it have been banned (thankfully), but even flavors such as these ones are obviously going to catch the attention of young people. I mean, being able to smoke something that is going to have “flavor” or taste good sounds like a good deal on the surface. And if it is marketed to be safe, well then just about anyone is going to be inclined to at least try it.

So, they try it once. And they try it again and again, until the nicotine in a Juul makes most of its users come back for more. It’s exactly how cigarettes used to be marketed back in the day – appealing to the youth so they keep buying it for years to come.

Juul not only is marketed to be tasty and healthy, but it is apparently affordable. If you go on to Juul’s website, there is a “Savings Calculator” tab. Click on it and you’ll find out that by Juuling, you can save over $1,000 a year using this as an alternative to cigarettes.

Now, I will say that our generation is not too big on smoking cigarettes. I know some people that do it as a habit and some that may smoke a cigarette at a party, but things have definitely changed for the cigarette industry since our parents were kids. However, seeing that Juul is not as financially and physically costly as cigarettes will make anyone want to do it. Everyone loves a good bargain that you just can’t pass up.

So, my point here is that if you have a Juul, you may want to rethink that purchase. You could spend your money on better things such as a slick new pair of Crocs, a slice or two of pizza from Benny’s, or your Spotify Premium payment for the year. And to top it all off, you won’t have the lungs of a 50 year old at age 20 just from habitually smoking a device that literally looks like a flash drive.