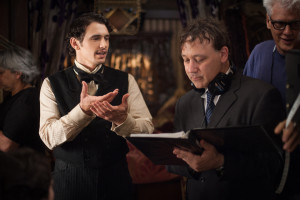 I confess: I always regard prequels to classic films with dread, as they are usually inferior.

But, I was pleasantly rewarded with Oz the Great and Powerful. The film depicts the journey of magician/con man Oscar Diggs (James Franco) from Kansas to the magic land of Oz. As one would suspect, the film serves as a prequel to the film, but a spiritual one, since it was created by Disney, instead of MGM. Thus, the film establishes continuity with the preceding film on the thematic, narrative, and visual levels.

There are numerous themes I could unpack, but I would like to focus on an image, without dialogue, from later in the film. Oz arrives at a village that was destroyed by the Wicked Witch’s Flying Monkeys. In the original film, the creative team linked the Wicked Witch of the West and her flying monkeys with fascism by having the uniforms colored in red and black and having the flocks of flying monkeys resemble bomber formations. In Oz the Great and Powerful, we see the other side of this image: the decimated village was made out of fine China, which creates a surreal mass of curves and jagged edges, capturing the horrifying chaos of Picasso’s painting “Guernica.” The connection is cemented when Oz lifts up the separated face of a porcelain doll off the ground and looks at it, thus drawing an explicit connection to the figures on the painting. This silent sequence illustrates the casualties of war and reinforces the urgency for stopping the Wicked Witch.

It is natural, after reading about these themes and cinematic nods, to think that film is a dark entry or that it has an agenda that bogs down the film. In reality, it does not: these images are carefully spliced into the narrative so that they reinforce the thematic continuity with the preceding film, but are balanced with plenty of Raimi’s Three Stooges inspired slapstick and Easter Eggs. The Easter Eggs in this film are the numerous references to the original Wizard of Oz and Sam Raimi’s film. For instance, a villain transforms into a monstrosity resembling the Evil Witch from one of Raimi’s earlier films, Army of Darkness, whose main star, Bruce Campbell, also cameos in the film.

The careful calibration that was applied to the narrative also applies to the visual space of the screen. Oz is a fine mixture of computer generated imagery and practical special effects. With the exception of the occasional mass of flying insects, the level detail on the imagery maintains the illusion, with the effects on Oz’s two sidekicks – a girl made out of China and a flying monkey –rivaling that of Gollum from The Hobbit. As one would expect, the set dressers and animators put all of the effort they could to establish a visual continuity with the parent film, such as Emerald City, or the opening of the film, which was shot with the same aspect, but in black and white, instead of sepia.

It stands that the execution of this colorful world is contingent on good writing and casting; and the film does fine. Franco’s character is the centerpiece of the film: unlike Dorothy, who audiences connected with immediately, Oscar Diggs is a very flawed character. Diggs starts the film as an unlikable character, who views people as utilities for achieving his objectives. This perspective is reversed over the course of the film, when his travel companions become family to him, like Dorothy’s did in the previous film.

There were several aspects of the film that were contingent on Franco’s performance, and needless to say, he delivers. The entire cast refused to be overshadowed and, as a result, there is not a bad performance in the film.
But, I do have few minor problems with the film. First, the film occasionally overindulges itself in certain aspects: for instance, the slapstick is overdone, or, at the end, there is a battle between two witches that closely resembles the terrible final duel between Harry Potter and Voldemort in Deathly Hallows, Part II. And once in a while, the pacing was somewhat inconsistent. A scene would drag, or one would rush by, causing the viewer to wish they had lingered for a few more moments on the shot.

I highly recommend Oz. It is worthy to carry the name due its originality and fine craftsmanship.