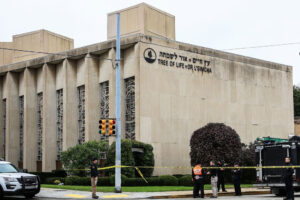 There’s a word that sort of means the opposite of deja vu; instead of feeling like you’ve been somewhere you’ve never been before or experienced a situation twice, jamais vu describes the sensation you get when a familiar place feels somehow different. And in the last year or so, Pittsburgh has been giving me a sense of jamais vu.

A year ago this week, something changed in our city when a man walked into the Tree of Life synagogue with a gun, killing 11 worshippers in the deadliest antisemitic attack in American history. The world rallied around Pittsburgh, voicing support for its Jewish community and expressing disgust at the rhetoric that enabled the terrorist. Fundraisers were posted to the Internet and signs went up in windows and front yards promoting a message of unity in the wake of horror. The solidarity was unparalleled; the worst of times can often bring out the best in people.

While they say hate can’t weaken a city of steel, it can still dent it, knock it out of shape, bend it up and make a place I’ve known for most of my life feel unfamiliar. There are some wounds that time can’t suture shut so quickly, and even when they begin to heal, the scars sting with phantom pains and twinges of raw remembrance.

The storefronts are all the same, only now, there are signs in the windows reading “stronger than hate.” The businesses and buildings that have been there for as long as I can remember are still standing, only now, memorial banners and flowers decorate their facades. The people are still as friendly and the neighborhood is still as vibrant as it always was, but Squirrel Hill feels haunted by a homesickness for the place it was before.

The differences are soft and subtle, easy to miss if you aren’t paying attention. It would be nice to say that we’ve overcome the tragedy and loss that befell the city last year, that in banding together and lifting each other up, we’ve put the past behind us and, essentially, moved on. It would be nice, but it wouldn’t be true — at least not entirely. A city can’t undergo something so awful and come out of it unchanged.

This year’s Rosh Hashanah services in Squirrel Hill, held earlier this month, were well-attended and, as always, nice; Jews from across the city came together to usher in the Jewish New Year with the ceremonial sounding of the shofar — an instrument crafted from a ram’s horn — and a worship service. But the security guards at the entrances weren’t there last year. There was a stricter sign-in process. The rabbi’s sermon made mention of Tree of Life; it has become known as “10/27,” a simple but foreboding way to say it without really saying it. It’s like 9/11; everyone just knows.

Pittsburghers are tough and Jews are a resilient people — if we weren’t, the diaspora wouldn’t have made it this far. But the point is that we shouldn’t have to be resilient.

There shouldn’t have to be fundraisers to pay for funerals or signs condemning antisemitism, because these bigotries shouldn’t exist in 2019. The Tree of Life shooting never should’ve happened, because there never should’ve been the vitriolic and divisive speech forcing a wedge between communities. There should be better gun laws to prevent semi- automatic assault rifles from falling into civilian hands; guns of that caliber serve one purpose and on purpose only: to kill as many people as possible very, very quickly.

As we approach the one-year anniversary of 10/27, we ought to be mindful of the power of words and how the actions they spawn can never be undone, and we have to condemn hateful rhetoric when we hear it — no matter who we hear it from.