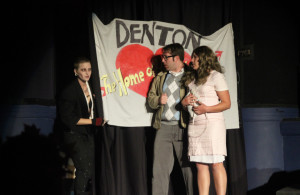 By: Marlee Ebbert | The Duquesne Duke

This is the standard beginning to The Junior Chamber of Commerce Players’ shadow cast performance of The Rocky Horror Picture Show at the Hollywood Theater in Dormont.

The 1975 British science fiction musical film follows two characters, Brad Majors (Barry Bostwick) and Janet Weiss (Susan Saradon) on their way to meet their professor and share the good news of their engagement. On the way, their car breaks down during a storm and they must seek shelter to phone a mechanic. They come across a mansion belonging to Dr. Frank N. Furter (Tim Curry), a scientist and transvestite hailing from planet Transsexual in the galaxy Transylvania. The couple must survive a night of weird drama and mayhem with Dr. Frank N. Furter, his servants, and his latest creation, Rocky.

Twice a month, the actors suit-up in corsets and party hats and reenact the film all while the movie plays on the screen, which is also known as a “shadow-cast.”

It’s not unusual for audience members to talk during the movie or throw objects around. It’s actually encouraged.

For example, when character Brad Majors adjusts his glasses the audience shouts out, “I hope they don’t know I’m superman!”

The audience can also purchase or bring their own props such as toast and toilet paper to throw at other audience members at key moments in the movie.

So when Dr. Frank N. Furter says, “I’d like to make a toast,” toast goes soaring through the air.

But, the JCCP may no longer be able to hold such a unique event, due financial issues with the theater.

The JCCP’s performance of Rocky Horror has been out of the theater since January of this year according to Allison Wolfe, who plays Columbia in the show.

Thanks to The Hollywood Theater, it was only until this month that they were able to perform two Halloween specials of Rocky Horror which were shown on October 25th and 26th .

Efforts are still trying to be made to save the theater.

According to cast member, Chris Merrill, JCCP has put on other performances at the Dormont Theater.

These shows include a shadow-cast version of the 1985 comedic murder-mystery film, Clue and the 1936 musical satire, Reefer Madness Musical.

According to Kozlowski, who played Magenta, Frank’s servant in the movie, a lot of time and energy is put into getting ready for the shows and none of the cast members want to see it go.

“I’ve been coming to the show since high school. It was a stress reliever,” Kozlowski said.

“It’s always been my place to go to have fun and to be accepted.”

“We’re focused on being a group,” Merrill said. “The rule of the show is to have fun.”

In fact, three out of the eight rules listed at the beginning of the show are, “If you’re not having fun, you’re doing it wrong.”

But if The Hollywood Theater cannot raise the funds it needs to purchase the DCP and remain open, there will no longer be the fun of getting actively involved in The Rocky Horror Picture Show.

Without the theater, what once were late nights of doing the Time Warp (again), shouting obscene phrases during the movie and ducking for cover as toilet paper flies through the air would simply become memories sealed in a vacant building.

September 22, 2016 The Duquesne Duke Arts & Entertainment Comments Off on Fall in love with Pittsburgh this autumn

By Madison Pastrick | Staff Writer Today marks the first day of autumn — a season filled with warm apple cider, classic horror movies, jack-o’-lanterns and big sweaters. There’s always so much to do, so […]

The Hollywood Theater: more than movies

October 31, 2013 The Duquesne Duke Features Comments Off on The Hollywood Theater: more than movies

By: Joey Sykes | The Duquesne Duke On quiet Potomac Avenue in Dormont sits The Hollywood Theater, a theater with a history just as unique as the movies it shows. The theater, opened in 1924, […]

‘Rocky Horror’ should not have done the time warp again

October 27, 2016 The Duquesne Duke Arts & Entertainment Comments Off on ‘Rocky Horror’ should not have done the time warp again

By Zachary Landau | Staff Writer Disappointment is too weak of a word to describe “The Rocky Horror Picture Show: Let’s Do the Time Warp Again.” Despite putting my expectations at rock bottom and avoiding […]