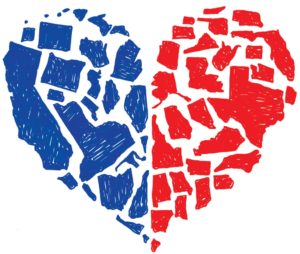 If you would have told me two years ago that I’d soon find myself in a long-term relationship with a republican, I would have laughed. My whole life I had been so invested in staying true to my liberal ideals, I swore off the idea of dating anyone but a democrat. I guess life comes at you fast, as the youths would say, because here I am in 2019 in a very healthy and happy relationship with a conservative.
When I met Jarod, my boyfriend, his politics alarmed me in all honesty. The day we met, I was cracking jokes about republicans, assuming that he was a democrat, like me. At the end of the night when I found out he was further on the right than I had hoped, I felt kind of foolish for making assumptions, but I also was wary to even see him again.
In today’s political climate, everyone wants to stay within their own group, which is exactly how I felt previously. Everyone wants to avoid those who don’t think the exact same way. I get it; we live in a “cancel culture.” For example, if a famous person reveals just one political ideal they believe in that the masses don’t support, he or she is “canceled.” We are so quick to judge people based on their politics.
When I told my liberal friends that I was dating a republican, I definitely felt their judgment and confusion. Their voices said, “I’m happy; you’re happy,” but their faces said, “girl what are you thinking?” Well, here is what I was thinking and continue to think every day….
Contrary to popular belief, you are more than your political party. There are a million things about each person you meet. They are the music they like or the books they read. They are made up of little quirks and mannerisms. They are not just their political party.
I’m not saying that it is easy to be friends with all people who don’t share your beliefs. Some people are more aggressive and hateful about their politics. For example, if you belong to the LGBTQ+ community, it may be hard to see yourself forming a friendship with someone who is not accepting of you. That makes sense. But what doesn’t make sense, is prohibiting yourself from forming a human connection based off a political party.
When it comes down to it, not all republicans are hateful and aggressive and not all democrats are socialists and “snowflakes.” Would I be with Jarod if he were what I consider to be a bigot? No, because that isn’t something I cannot find a silver lining in. However, I like being with Jarod because his ideals challenge mine and make me think about the world in a different way. I honestly have found a deeper understanding of the way he thinks just from having civilized and polite conversations with him.
If we surround ourselves with people outside of our comfort zone, we would find that we are more alike than we think. Maybe we wouldn’t live in such a polarizing and hostile time. Trust me, there are people out there who think differently than you and do not want to chastise you because of it. Human connection is deeper than your politics, and I find that out every time I hang out with Jarod. I guarantee the story of Jarod and I is not an isolated incident. Just listen to the podcast, “I Love You, but I Hate Your Politics.” Connections between unlike minded people happen every single day.
If you read this article and don’t believe me, I challenge you to sit down with someone who is not of your political affiliation and just talk. You’ll find something in common. Actually, I am willing to bet you will find a lot more in common than you don’t. Sure, you may not think the same thing about economics, but how much does that matter? I would honestly rather look past most people’s politics (as long as they are not hateful and problematic) than let it limit my chances of making a friend.
For a long time, my mantra has been that is so much easier to be filled with love than it is to be filled with hate. So, stop hating people based off of who they vote for, and look deeper into someone’s soul. There are still good people who do not think the exact way you do.