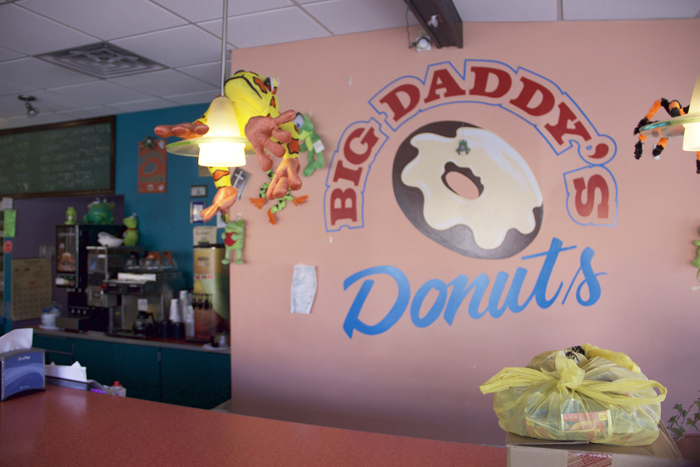 By: Addison Smith and Seth Culp-Ressler | The Duquesne Duke

Much as cupcakes were just a few years ago, donuts seem to be the new culinary fad. Specialty shops are popping up across the country, all with their own takes on the breakfast confection. The greater Pittsburgh area has its own fair share of donut vendors, all spread out among the surrounding city limits. Features Editor Seth Culp-Ressler and Opinions Editor Addison Smith decided to test the waters and see what the landscape of frosting and sprinkles was really like. The catch? They only had one Sunday morning to hit as many shops as they could. Armed with a half-gallon of milk each, the two intrepid tasters visited five locations. Here they each recount their adventure. 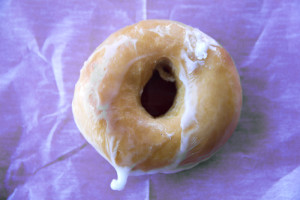 S – Let me be clear, I’m not one for eating large portions. As such I was somewhat apprehensive upon embarking on this trip. That said, I couldn’t have asked for a better start than Big Daddy’s. A small, quaint little shop with a distinctly vintage feel, the setting couldn’t have been better. Happily the same could be said for the donut. We both opted for a classic glazed, at a wallet friendly price of 85 cents each. The donut itself wasn’t warm, but it was definitely fresh and fluffy. Couple that with a nice, sweet glaze and you’ve got a recipe for success. Oh, and make note – their Sunday special is a dozen donuts for $6. Better loosen up that belt, because that deal does not bode well for the scale.

A – An inconspicuous donut shop in Crafton, Big Daddy’s was dead when we arrived Sunday morning. However, the scenery inside made up for the lack of life. Styled after a classic ‘50s diner, Big Daddy’s had pink and turquoise decorative flags splashed all over the shop. Now onto the most important part: the donut. I bought a classic glazed donut that instantly melted in my mouth. While it wasn’t the freshest donut (keep in mind, we arrived around ten in the morning), it was exquisite. The texture was perfect and the donut itself was so good I would drive the five and a half miles to Crafton again. 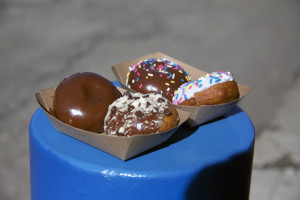 S – Only one donut in, I was still feeling pretty confident, and with that we made it to Peace, Love & Little Donuts. I imagine this will be the most familiar shop on the list for Duquesne folk, having a location conveniently close on Smallman Street in the Strip District. I indulged a bit, ordering both a chocolate frosted and a chocolate chip cookie dough. A note for those unfamiliar, Peace, Love & Little Donuts make their treats in a miniature size, thus the order of two. As always they were fantastic: fresh, warm, frosting to die for – the lot. Honestly, these donuts fall much more on the dessert side than anything else we ate throughout the morning. The downside is the price. At over five bucks for four mini donuts, you’re paying significantly more than at any other shop. Still, they are mighty good.

A – If you haven’t been to Peace, Love & Little Donuts in the Strip District, everyone will tell you that you are missing out on quality noshes. With no room to sit or stand inside, you simply grab your donuts and go. Here, I decided upon a vanilla frosted donut with sprinkles and a chocolate frosted donut with sprinkles. They were fresh out of the deep fryer and the icing was melting off to the sides. Needless to say, we got there at the right time. These donuts are what I would call “glorified cupcakes,” but overall was one of the best I’ve had. Bonus points for freshness, but the expense of the donuts is insane. We paid $6 for four donuts, when we could have gotten a dozen at Big Daddy’s for the same price. Quality? Yes, but too expensive to justify at a certain point. 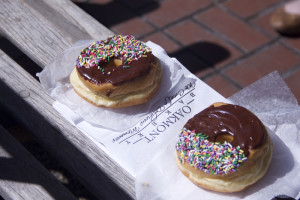 S – By the time we got to Oakmont Bakery I could tell that my confidence would be short lived. I couldn’t think of such things, though, as there were more donuts to eat. Oakmont is a large and impressive establishment, a place where any baked desire can be fulfilled. For our purposes that meant donuts (though desire was a word that was on its last legs), specifically chocolate frosted half covered in sprinkles for the both of us. The verdict? Decidedly average. They weren’t bad by any means, but don’t expect to be blown away. Still, the selection was broad and prices cheap at 85 cents each. If donuts are only one of many baked goods you are in need of, Oakmont may be just the place for you.

A – Oakmont Bakery on a Sunday is best described with one word: crazy. There’s little room to maneuver yourself inside because everyone in the area is buying something. The donuts were in the back of the bakery, away from sight, and some were impossible to see because of a high-topped counter. I got a simple chocolate iced donut, half covered in sprinkles. Honestly, I know Oakmont Bakery is Pittsburgh famous, but their donuts are simply glorified pastries that can be bought from Giant Eagle. Nothing ventured, nothing gained, but I will not take the trip there again. 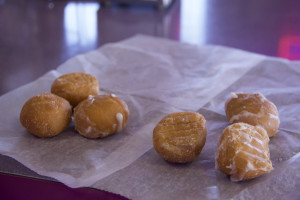 S – Disclaimer: we could have done our research a bit better for this stop. While Donut Shack Diner does have “donut” right there in the name, their emphasis is much more focused on the “diner” side of things. In fact, by noon when we arrived their small case of donuts was almost sold out. So we ended up getting six donut holes, three glazed and three sugar. To be brutally honest … they weren’t great, or even very fresh at that. Nevertheless, I’ll chalk that up to our poor planning and not the fault of Donut Shack themselves. They only charged us 50 cents for the six donut holes, and by all accounts their diner fare is excellent.

A – I think this was the lowest point in the day. More so a diner than a donut shop, Donut Shack had no donuts left when we arrived, but had a ton of donut holes. So, Seth and I bought six donut holes, three with just sugar and three glazed and each ate three. Right around this point, we were feeling sick from the donuts eaten before and the fact that donut holes we received from Donut Shack were not fresh didn’t help this point. We shoved them in our mouths, tipped the girl and left. This is when we realized how bad of an idea this was. 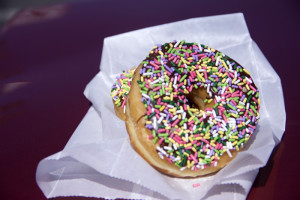 S – Our final stop of the day was Stoecklein’s Bakery, and neither of us were too keen on putting down another donut. We persevered, however, if only for the commitment we made for this very story. Stoecklein’s is a little bakery, not the giant operation of Oakmont. We decided to go with two be-sprinkled chocolate frosted donuts, nearly identical to our selections at Oakmont. The donut itself was better than Oakmont’s, but the frosting was deemed a touch too sweet. Then again, maybe that proclamation was a product of our donut-meters being overfull. As with the others, the donuts weren’t pricy at, as elsewhere, only 85 cents a pop. With some amount of difficulty I got through the last few bites, afterwards kicking back my seat in Addie’s car to close my eyes and question why I had agreed to this. I’d be lying if I recommended it. I think I’ll be laying off the donuts for a while.

A – Our last stop of our morning was Stoecklein’s, a cute bakery in the Penn Hills area. Here, there were only five donuts left for the day. Seth and I took the last two chocolate frosted with sprinkles and went to the car to eat them there. The icing was overly sweet, but the donut fared better than Oakmont’s. Add in that Seth and I were both near a point of no return, the donuts began to lose taste and flavor. Once we stomached the donuts, which were very good, we sat in the car with our jugs of milk and contemplated why we did this to ourselves. Our sugar rushes and excitement had crashed; we officially gave up and were joyous when we realized we didn’t have any more shops to go to. Then, we conveniently drove by a Dunkin’ Donuts, made eye contact and didn’t stop. Next time, Dunkin’. Unless I drive to Big Daddy’s for a $5.99 dozen.

A + S – Overall verdict? If you’re willing to part with the cash, Peace Love & Little Donuts can undoubtedly satisfy even the sweetest of teeth. But for the more budget conscious donut connoisseur, we say Big Daddy’s is the way to go. Either way, don’t eat more than two or three in one go. Trust us on that one.

April 18, 2013 The Duquesne Duke Features Comments Off on Oh, the places you can go … Explore your city!

With the semester nearly over, graduation rapidly approaching and the weather finally warming up, now’s the perfect time to step outside and take in all that Pittsburgh has to offer. Take an afternoon to check […]

August 20, 2014 The Duquesne Duke Features Comments Off on Welcome to the Steel City

By: Katie Auwaerter  |  Features Editor If you haven’t been properly welcomed yet, on behalf of The Duquesne Duke, welcome to Pittsburgh! This former industrial hub that you now call home has a lot to […]