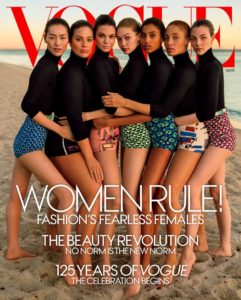 Once again, it seems that the “Fashion Bible” Vogue is under fire for its apparent Photoshop fail and lack of diversity in a cover that was supposed to be celebrating the “normal woman.”

The March cover featured “America’s Next Top Model” judge Ashley Graham, a plus-sized model, alongside big names like Kendall Jenner and Gigi Hadid. People’s outrage came at the fact that Graham was the only one posing with her hand covering her thigh. Hadid’s fingers were also laced around Graham’s waist, looking way too long and giving Graham the image of a slimmer waist.

I can understand where the outrage comes from. Vogue’s campaign for the issue was “The Beauty Revolution: No norm is the new norm.” By showing A-list models and an evident lack of diversity, that makes this movement fall a little short.

But listen, let’s be honest here. Vogue obviously does not care. This isn’t the first time the magazine has been accused of (poorly) Photoshopping its models. There have been countless other photo editing problems throughout the years.

But when it comes down to it, people still look to Vogue to display the newest, most cutting-edge fashions. Vogue is still considered the most popular fashion magazine currently on the market, and it still has a high demand of models that want to work for them.

Vogue is an institution. Founded as a weekly newspaper in 1892, Vogue obviously has been around for a while. When Anna Wintour took control in 1988, she revamped the magazine and sales surged. In June 2013, the magazine took on a healthy body initiative and decided to move away from super thin, super tall models. Granted, it is easy to see how one may argue with that today, but once again, modeling is an institution. It has been around for dozens and dozens of years, and while campaigns like American Eagle’s Aerie, a lingerie and loungewear brand, have vowed to stop retouching, it just isn’t that easy to change an institution. That is one company out of millions in the world.

When it comes to something as colossal as Vogue, it is a big deal just to have a plus-sized model on the cover. Over a decade ago, that never would have happened.

In reaction to the amount of social media users losing their minds over her posing with her arm over her leg, Ashley Graham responded to an Instagram comment saying, “I chose to pose like that, no one told me to do anything.”

Many others took to social media to complain about the lack of diversity and the Photoshop problem, but, when it comes down to it, Vogue won’t succumb to social media shame. An establishment that large and that engrained in its beliefs will not yield to a handful of people complaining on Twitter.

I just don’t think Vogue really cares. This isn’t the first Photoshop scandal the magazine has had and like always, it offers no response, no explanation and no apology. Vogue just keeps doing what Vogue does best, and people keep buying its magazines. Models still want to work for the company.

The change has to come from within, and honestly, it looks like it already is with the inclusion of Ashley Graham on the cover. It may not be coming fast enough for online social justice warriors, but Rome wasn’t built in a day, either.

March 11, 2021 The Duquesne Duke News Comments Off on A look at Shank’s mandatory diversity training

Past comes to life in live-action ‘Beauty and the Beast’

March 23, 2017 The Duquesne Duke Arts & Entertainment Comments Off on Past comes to life in live-action ‘Beauty and the Beast’

By Salena Moran and Evan Penrod | Staff Writers Managing to hold true to the original storyline while also adding new scenes and songs to enhance the story, Disney’s live-action “Beauty and the Beast” successfully […]