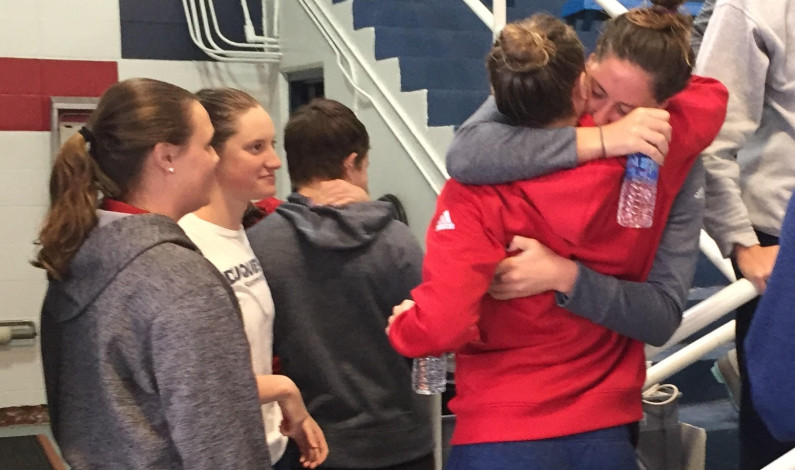 Brandon Addeo | News Editor Senior Duquesne swimmer Hallie McCue was facing a window in the Fort Lauderdale airport awaiting her flight home when she first heard the gunshots. “There was a pack of people running — I can’t even describe their faces,” McCue said. On Jan. 6, Esteban Santiago, 26, of New Jersey, shot […]

By The Duquesne Duke on March 11, 2015 duquesne women's swimming Sports

Duke Sports Staff The women’s swimming team matched its highest finish in DU history at the Atlantic 10 Championship before spring break on Feb. 21. The Red & Blue placed third of 11 teams at the three-day event behind strong performances from a number of Dukes. In total, the Red & Blue broke all five […]

By The Duquesne Duke on January 21, 2015 duquesne women's swimming Sports

Andrew Holman | For The Duquesne Duke The Duquesne women’s swim team has climbed into the national scene this year as a highly improved program looking to make some noise in the upcoming Atlantic 10 Championships in February. The Duquesne girls rank inside the top 50 among mid-majors by CollegeSwimming.com, who also ranked them as […]

Claire Murray | Asst. Photo Editor Over the weekend, the Duquesne women’s swimming team ended their season in Geneva, Ohio with a fifth place team finish at the Atlantic 10 Conference Championship. The Dukes gave an impressive performance at the four day meet, breaking eight school records, collecting several medals, dominating in the freestyle and […]

Rich Donahue | The Duquesne Duke For the Duquesne women’s swim team seniors, Saturday marked an end of an era. It would be the last time Meghan Smith, Miriam McGeath, and Hannah Huber would compete in a meet at Tower’s Pool. Well as Huber put it in the post meet interview, the seniors went out […]

Claire Murray | The Duquesne Duke On Saturday, the Duquesne women’s swim team defeated Youngstown University 149-108 at the Tower’s Pool. The team placed first in 11 of the 14 events. According to head coach Dave Sheets Youngstown lacked the depth needed to compete with the Dukes. “The biggest thing I contribute to the win […]