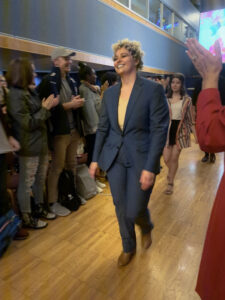 The fate of this year’s Gender Neutral Fashion Show was uncertain; a series of obstacles and restrictions had been imposed upon the hosting groups, Gender Forum and the Department of Women’s and Gender Studies (WGS), and for awhile, it seemed as though the show wouldn’t be able to happen at all.

But after massive backlash from both university affiliates and community members, the university retracted its stance that the show could only go on if it avoided gender neutral language and iconography, and the event was greenlit once again.

On Wednesday, Oct. 23, the Union Ballroom filled with nearly 500 attendees — in comparison, last year’s event had 103. There were 20 models and five panelists speaking about fashion, history and gender, and according to Gender Forum President Emma Shirey, the second annual Gender Neutral Fashion Show was a hit.

“It was exactly what Duquesne University needed,” Shirey said. “Everything worked out exactly as planned. We had 20 models and five panelists. It was beautiful.”

Kinnahan and Engel discussed the role of fashion in history, and how the way folks dress reflects social ideas about gender. In her opening remarks, Blair echoed this sentiment.

“From both theoretical and cultural standpoint, gender is a performative process,” Blair said, citing feminist scholar Judith Butler. “The performances [of gender] are in response to a larger cultural assumptions … that empower some and disenfranchise others.”

Among those disenfranchised by normative gender expectations are members of the LGBTQ+ community.

“The importance of the Gender Neutral Fashion Show is both academic and communal, as we also come together to support LGBTQIA+ students, faculty and staff to feel visible and valued,” she said.

Blair went on to say that the fashion show will help create a “relationship between gender theory and self-expression.”

Frick, who has reached local acclaim following their recent gallery exhibition Worse for Wear at BOOM Concepts, highlighted what they identified as an alarming trend of transphobic behavior and anti-LGBTQ+ violence.

More than half of the population of transgender women in Atlanta reported physical or interpersonal violence in 2017, according to Frick. They also pointed out, though, that it is notoriously hard to track violence against trans people.

“In the U.S., it is prohibitively expensive to legally change gender markers on government IDs, particularly considering that trans people are far more likely to experience job insecurity and discriminatory hiring practices” they said. “This often leads to murdered trans people being reported by police and local news with dead names, or not acknowledging that the person was trans.”

Frick was going to take a moment to list the names of every trans person killed in America in 2019, but they said it would’ve taken up the rest of their speech time. And so, they focused on a select few victims, including Elisha Stanley, a black transgender woman who was murdered in Downtown Pittsburgh this past September.

“All too often, Pittsburgh is not stronger than hate,” they said.

But Frick stressed that life as a queer individual isn’t all negative. Often, clothes and fashion can make a world of difference. The Gender Neutral Fashion Show, they said, allowed for students who may have otherwise felt marginalized on campus to find a space where they could express themselves freely.

“It’s important to hold events like this that support and normalize queer and otherwise gender nonconforming styles of presentation,” they said.

Frick believes that the fashion show, coupled with additional educational resources, will help make Duquesne a better place for queer people. Shirey agreed that, while the well-attended fashion show was a success, activism and advocacy can’t stop after the show, when the publicity ends.

“Walk with us tonight on the runway, walk with us in life. Stand up with us, applaud for us. We did it, but we’re not done,” Shirey said. “Here’s to many more years of Duquesne University’s annual Gender Neutral Fashion Show.”