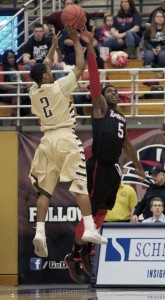 It’s no secret that the Duquesne men’s basketball team is in the midst of one of its worst seasons in recent memory.
The program’s fans are understandably expressing frustration with its 8-19, 1-12 record, especially after its aberration of a 7-5 start. And there is plenty of blame to go around for the team’s implosion in the past months.
But let’s make this perfectly clear: None of that blame should be placed upon the shoulders of coach Jim Ferry.
Last March was a disaster that everyone familiar with this team, including the athletic department, openly recognized would shake the foundation of the program for at least the next few seasons.
In a three week period last spring, the Dukes’ best pure shooter (B.J. Monteiro) and their most reliable ball-handler (Eric Evans) ended their collegiate careers, their most skilled playmaker (T.J. McConnell) and two of his three back-ups (Mike Talley and Danny Herrera) transferred and their best recruit in at least two generations (Donovan Jack) decommitted and decided to attend Penn State.
To believe that Ferry could have replaced Ron Everhart, the man most responsible for returning some relevance to this program, after that train wreck and had this team prepared to contend in the Atlantic-10, one of the nation’s most demanding basketball conferences, is absurd.
This team needs to be built from the ground up and, quite frankly, the bricks and mortar for its foundation aren’t there yet. Until he gets a full offseason to recruit the players he needs to fit his system and then a few seasons after that to mold those recruits, Ferry’s coaching ability cannot accurately be measured.
But since the Dukes are barreling toward the end of their first season under his tutelage, let’s look at what Ferry has been able to do during this 1-12 conference stretch.
In those 12 conference losses, Duquesne lost eight by 10 points or less against teams that have mounds of more experience and talent. In most of those games, including its 78-71 loss to St. Bonaventure on Saturday, Duquesne was within five points of the lead during the games’ waning minutes.
This is despite being completely outmanned in every contest. Just on Saturday, the Dukes had to deal with the Bonnies’ 7-foot center Youssou Ndoye who towered over 6-foot-6 center Andre Marhold and blew by 7-foot-1 center Martins Abele. Duquesne has dealt with this issue all season and the last time I checked, you can’t teach height and you can’t teach speed.
But Duquesne was able to hang with the Bonnies, much like it’s been able to hang with most teams this season, and forced Youssou to foul out. Down as much as 12 in the first half, the Dukes recovered and were tied at 59 with less than seven minutes remaining.
Outside of two blowout losses, against Virginia Commonwealth and George Washington, Ferry’s team has mirrored its coach’s fight and intensity but has lost because it’s simply been outgunned, which Ferry reiterated after the loss Saturday.
“I thought our guys really fought, fought to the end,” Ferry said. “We’ve talked all year about the margin of error and we have to come up with those rebounds to give ourselves a chance to go down and score. Maybe just not being able to do it, in regards to talent.”
And there lies the answer. This team is led by a group – the starting five of freshmen guard Derrick Colter, forward Quevyn Winters and guard Jeremiah Jones, junior forward Jerry Jones and Marhold – that has shown flashes of A-10 caliber talent. These players are skilled enough to deserve a spot on an A-10 roster, but would only be role players on past Duquesne squads led by either Aaron Jackson or the combination of Damian Saunders and Bill Clark.
Ferry’s tenure on the Bluff is a year in, but his true test has yet to start. So, is he the right guy for this program?
The answer: Ask again in three years.

By Adam Lindner | Sports Editor July is finally here, and for sports fans, July signifies the beginning of free agency in both the NBA and the NHL. Despite a slow beginning to NBA free agency, […]

Adam Lindner | Staff Writer Nov. 7, 2019 The Duquesne men’s basketball team got off to a slow start in its first regular season game against Princeton on Tuesday night at PPG Paints Arena, but […]

Duquesne loses to SLU, falls to 10-7 in conference

March 6, 2019 The Duquesne Duke Men's Basketball, Sports Comments Off on Duquesne loses to SLU, falls to 10-7 in conference