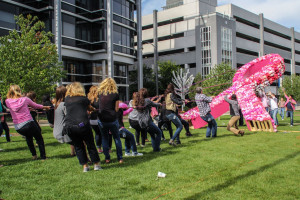 At 8 a.m. on Wednesday, volunteers from the corporate offices of American Eagle Outfitters created a three-dimensional, 24-foot tall Breast Cancer ribbon made of bras.

Yes, you read that right.

The structure stands outside of American Eagle’s corporate headquarters neighboring the Hot Metal Bridge in the South Side Works, serves as a symbol of support for breast cancer prevention research.

“We’re encouraging girls to get educated, start young, and take care of their health. With our demographic, this is the age that girls should be starting to think about this stuff and be aware,” said Ellen Howarth, Social Media Coordinator for Aerie.

Aerie, American Eagles’s women’s underwear brand, is partnered with Bright Pink, a non-profit organization based in Chicago that focuses on early prevention breast and ovarian cancer.

The more than two-stories tall structure is covered with an estimated 1,500-2,000 pink bras.

“We try and do some big display every year around the office to support the cause and demonstrate their excitement about the campaign,” said Mandy Cramer, Marketing Coordinator for Aerie.

According to Marice Eberhart, Director of American Eagles Foundation, it took three months to collect all of the bras for the project. The bras were collected from Aerie surplus stock.

Steve Ford, owner of Decade and Surf Pittsburgh, collaborated with the American Eagle Foundation and Aerie in constructing the ribbon.

“Aerie called me and said that they wanted something big for breast cancer awareness month, so this year they came up with this giant ribbon,” Ford said. “It’s a statue, essentially. We’ve been working on it wfor over a week.”

According to Eberhart, the awareness ribbon is the visual foundation of a larger charity drive by Aerie for Bright Pink. These charity drives include internal and in-store donations along with a limited edition merchandise to serve as a fundraiser.

“We made our own Bright Pink Bridgett bra which selling in Aerie stores right now and 100% of the sales will go directly to the Bright Pink organization,” Eberhart said.

The campaign will run through October 15. After the campaign ends, the structure will be dismantled and put into storage for potential reuse. According to Eberhart, after the ribbon comes down, some of the bras will be sent to be laundered and then donated to local women’s shelters.

October 31, 2013 The Duquesne Duke Sports Comments Off on Duquesne thinks pink for October