The Red Masquers are featuring a truly different production this year, as they perform the “Sesame Street” inspired “Avenue Q.” The comedic musical, which opens at the Genesius Theater on Sept. 28 and runs every Thursday through Sunday until Oct. 9, takes an adult twist on the popular children’s television show.

The show is focused on puppets who go about their young adult lives trying to find friendship, and figuring out what they want to do with their lives in a fictitious version of modern day New York City.

Assistant Director for “Avenue Q”, Junior Dora Farona, said that the well-renowned musical is “silly, yet touches on many subjects that we all struggle to talk about: homosexuality, race and racism, and the difficulties of being a college graduate neck-high in debt.”

The show’s subject matter perfectly targets a college audience, with a primary focus on the struggles that one encounters after graduation, a thought that looms over most college students today. It also deals with the social issues aforementioned in combination with an abundance of witty college humor, causing the show to be set apart from others and making it a real treat to have “Avenue Q” performed at Duquesne.

Farona also said that “Avenue Q” is the first musical with a cult-following that the Red Masquers have done in some time. This season’s performances include many well-known dramas, such as “How I Learned to Drive” and “True West,” which are quite different than “Avenue Q.” She said that there is a large number of underclassmen who are involved with the show as well, making it particularly exciting to see everything come together and witness them take part in such a valuable experience.

This contemporary musical is adapted from the Tony award-winning show, which ran on Broadway for six years and is still being performed off-Broadway today. The inclusion of puppets makes it unique, especially with it being performed on a college campus. As last year consisted of mostly dramatic performances for the Red Masquers, “Avenue Q” shakes things up while adding a bit of Duquesne flare to the successful Broadway production

According to “Avenue Q”’s stage manager, Sophomore Mackenzie Martin, the show has many humorous aspects and relatable themes. Playing on its “Sesame Street”-esque qualities, it takes the innocence of puppets and turns it into content that nearly every adult and young adult can identify with. She stated that the show has heartfelt moments and acts as a sort of coming of age story, with characters attempting to discover their purposes in life. 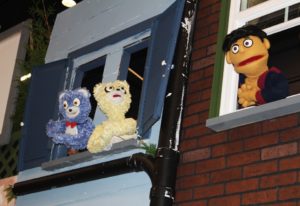 “The show itself, I hope, will give the audience a lot of laughs, but also give them something to relate to as college students and adults. I hope that they can walk away feeling that they are understood by people everywhere,” Martin stated.

This exuberant production will be sure to entice all audiences when it opens next Thursday. Tickets for the show cost only $5 to Duquesne students, and can be reserved online now at the Red Masquers’ website. “Avenue Q” is definitely a show that you don’t want to miss.

By: Corey Fischer | for The Duquesne Duke Known across campus as Duquesne’s resident theatre company, the Red Masquers have big plans for this year and two exciting shows right around the corner. Heading the […]

By: Sam Fatula | A&E Editor Although you may be vaguely familiar with Duquesne’s theater arts troupe, The Red Masquers remain an underappreciated talent within the University’s student body. Every semester, the Red Masquers put […]

Masquers kill it with “Death of a Salesman”

October 8, 2015 The Duquesne Duke Arts & Entertainment Comments Off on Masquers kill it with “Death of a Salesman”

By Zachary Landau | the Duquesne Duke At the cornerstone of every American English education are the “Great American [insert your medium of choice here].” Having to endure these classics reveals that, somehow, each one […]