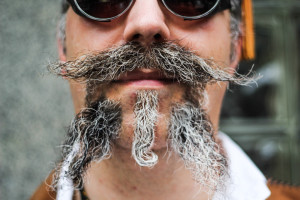 Some came waxed. Some came groomed. Some came natural. Faces were pitted against faces. Men took on men. Women even got involved.

Facial hair was the name of the game at Steel City Beard and Mustaches Club’s Beards for Beasts 1/10thK & Facial Hair Competition, held last Saturday at The Rex Theater in South Side.

“I knew I wanted a competition in Pittsburgh, but I knew it would take some time,” president and captain of Steel City Beard and Mustache club, Seth DeSabato said.

The club, started in January 2012, meet monthly and has meetings at local businesses, like Bingham Tavern, Bocktown in Monaca and Rivertowne Pour House, to support the community, DeSabato said.

The “beasts” who benefited from the competition were those of the Western Pennsylvania Animal Rescue League, with the estimated $2,500 in proceeds going to the charity, raised from entrance fees, 50-50 raffles and pre-competition at Dee’s, according to DeSabato.

“We’re not in it for us. We like to show off our facial hair and donate money toward charity,” DeSabato said.

With 88 competitors from seven different states, participants completed the walk from Dee’s Café to the Rex, more of a two-block beard-on-parade from East Carson Street establishments.

The competition felt like a hodgepodge of events: a fashion show with contestants showing off their beards to the crowd and judges on stage, a sporting event with “The Final Countdown” and other stadium anthems played between beard categories and a convention with vendors selling beard-related items like mustache mugs, beard wax, pipe tobacco and pipes. 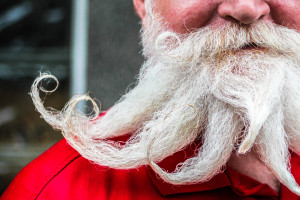 Among the beards of the bunch was Kevin Geiselman, 47 of Turtle Creek, with a beard his daughter April likes to call the “butterfly,” a combination of a mustache and segmented goatee, with his nose resembling a grey star.

The tech-guy for PNC Bank, wearing a fez and John-Lennon like goggles, has been styling his beard this way for the past five years and has had a beard for the past 25.
“[It] wasn’t just another beard. I’m a style. There’s no going back from that … If too many people do it, I’ll have to change it,” said Geiselman, who competed in the partial beard freestyle event.

The club’s first beard and mustache competition spanned 10 categories for competitors. Partial Beard (beard with no sideburns), Full Beard (connected beard) and Fake Beard (category for women to compete) were the backbone categories, with length and styling creating sub categories.

Competitors who came in first through third place were given a log plaque as their prize. Beards of the Old Northwest, a beard enthusiast club from Ohio, was the most represented beard group, was also recognized with a plaque.

In the full beard freestyle category, where “anything goes”, is where white-haired seasoned veteran Jim Daly found himself.

The 55-year-old owner of a pest control company in Ardmore, PA made the five hour trek to the competition with a beard that resembled a cross between Santa Claus and Davy Jones from Pirates of the Caribbean: a long white beard waxed into six horns, three to the left and three to the right.

“I started out with a large mustache and then when I started doing competitions that’s when I started growing the beard because I had more freedom to do different things with it,” Daly said.
Daly competed for the last three years in bearding competitions and has won or placed in 22 of 25 events with varying facial hair.

“It actually is a nice community … The guys are nice to me because I’m one of the older guys,” Daly chuckled. 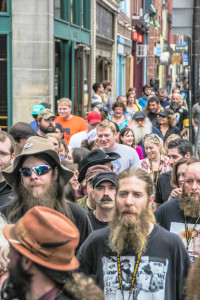 Rocky Iammarino, a 31-year-old plumber from Elyria, OH, 45 minutes outside of Cleveland, came to Beards and Beasts with Beards of the Old Northwest.

“We travel to different competitions to support charity, grow a beard and have a good time,” Iammarino said, sporting a Cleveland Browns Peyton Hillis jersey at the competition.

Iammarino has competed for two to three years, with Beards and Beasts being his fifth competition, where he placed third in the partial beard natural event.

“[You] look more like a man with a beard,” Iammarino said, “and it hides my double chin.”

Next year’s competition will be bigger and better, according to DeSabato, hoping to make Steel City Beard and Mustache club’s event sought out by those in the beard community, which he calls a “great big hairy family.”

For Iammarino, the feeling is everything. 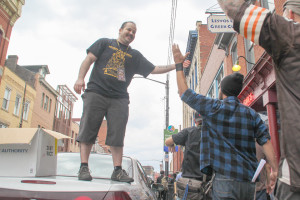 “[It’s the] thrill of competing without having to be an athlete,” he said.