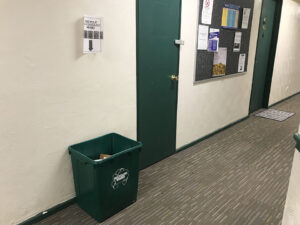 Once again, recycling is changing — this time, the changes are happening right on campus.

Brottier Hall has recently changed recycling policies, cutting down on which recyclables are accepted in the building.

Over the summer, Brottier Hall staff released a newsletter informing residents of its updates to its building-wide recycling policy. The newsletter announced a significant change, that “due to international recycling process and law changes over the last few years, Brottier has made the tough decision to only recycle clean paper and cardboard. This is due to the limitations on other recyclables and contamination issues.”

More recently, Brottier has once again updated its policy to include rinsed aluminum and tin, according to Angiola Gabriel, assistant director of operations at Brottier. Residents received a flyer this week listing accepted materials that they can recycle in the building.

Now, Brottier staff have placed recycling bins near the trash chutes on every floor that accept paper, cardboard and aluminum. Originally, these bins accepted all types of recyclable materials, and most still have signs indicating that some items, such as aluminum, can be taken to the bin in the lobby kitchenette. However, there is no longer a recycling bin in the kitchenette, and the only lobby-floor recycling bin accepts just paper and cardboard.

International policies in recycling began changing in 2017, when China issued a ban on imported recycling. The U.S. had since relied on China to accept its recycling exports, and the ban initiated a worldwide shift in recycling policies. Without a country overseas to accept it, the U.S. government had little time to figure out where to go with its 26.7 million annual tons of exported recycling.

Waste management companies across the U.S. began changing their recycling policies to adapt to the ban. Many decided to cut down on recycling altogether in order to avoid the risk of contamination — something Brottier Hall has decided to do, as well.

By shifting its recycling policy to only accepting paper, cardboard and aluminum, Brottier decreases the possibility of contamination by eliminating the recycling of plastics and glass. However, students who initially relied on Brottier Hall to dispose of their recycling now must either find other places to drop off their recycling or resort to throwing it in the trash.

In light of adopting stricter recycling policy, Brottier Hall staff is encouraging students to adopt less wasteful habits. Their newsletter includes Environmental Awareness Tips on how to become educated on recycling policy and adapt daily habits that decrease the use of wasteful materials.

Brottier’s recycling policy differs from the policies of other residence halls on campus. Other Duquesne residence halls still accept paper, cardboard, aluminum and plastics labeled 1 and 2, according to Bill Zilcosky, senior director of Facility Services and Operations at Duquesne.

Despite the difference in accepted materials, both Brottier Hall and the rest of campus residence halls dispose of recycled materials in the same campus recycling compactor.

“I can’t speak to the internal practices in Brottier Hall, but we do work in cooperation with them,” Zilcosky said.

Brottier residents looking for a place to recycle their plastics and aluminum are able to use recycling bins located in other residence halls and academic buildings, like the Student Union or Fisher Hall.

The City of Pittsburgh continues to accept plastics and glass at its drop-off locations, according to the Department of Public Works website. Pittsburgh accepts the following recyclable items: cardboard, glass bottles, aluminum and steel cans, mixed paper, plastic bottles, jugs and jars and bagged shredded paper. Items must be cleaned (uncontaminated) in order to be considered recyclable and cardboard must be flattened before being placed into the bins.