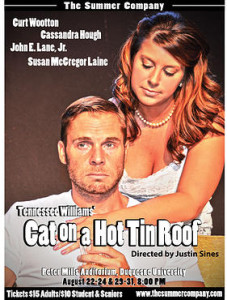 The Summer Company in Pittsburgh performed a production of Tennessee Williams’ play Cat on a Hot Tin Roof in the Peter Mills Auditorium in Rockwell Hall.

The stage was set beautifully with a simple bed, an ordinary couch, a stunning hanging chandelier and window shutters. It appeared to be the perfect country home of a wealthy southern family in the early 20th century. The music, which set the soothing yet emotional mood, was a recording of an album by the Civil Wars.

Williams’ play which focuses on family dynamics, wealth and contains homosexual themes was performed with intense grace. The plot of the play revolves around protagonist Brick, who is dealing with his dreams, the loss of a best friend and subsequently dives into bottle of liquor to combat his problems. The patriarch of the family faces death and must decide which son will have the money and property. Maggie, the wife of Brick craves to have a family and wishes her husband will look at her with love. With all these factors, the isolated Brick only furthers himself in his escape to the bottle until the very end, when Brick and Maggie must conceive a child to earn the property they rightfully deserve.

Hough, who played Maggie , the talkative and slightly overbearing wife of the protagonist, was impeccable. Her portrayal brought light to her glamorous dreams of wealth and a happy marriage along with her high-strung personality and her vivacious wit. She is an accurate portrayal of a woman fighting for everything she wants. She delivered her lines so naturally, one could forget she was acting.

Wootton was the second cast member to enter stage left, and he oozed sadness in his silence. The first act, he probably only said ten words in all, but his portrayal depended on body language and was exquisite. His only body movements in the beginning were silence and moving back and forth to a bottle of Jack Daniels to refill his glass. He was more than impressive in playing the broken man Williams wrote over half a century ago.

Wootton portrayed Brick, the depressed protagonist who is spiraling into severe alcoholism. Wootton’s performance in the second act was strong and believable. Every word he spoke demanded attention. His heated discussion with Big Daddy about his drinking problem and depression was so beautiful. Anyone who has witnessed someone suffer from depression would have been brought to tears by his monologue. He brought to life Williams’ character in the best way possible. Everyone stood in the theater when he walked on stage for curtain call and he rightfully deserved it.

Lane, who portrayed Big Daddy was more than wonderful. Lane, a theater arts professor at Duquesne, exuded energy and vigor. His portrayal of a dying patriarch was so wonderful. The relationship Big Daddy shared with his son Brick was so enticing and relatable. They loved each other to pieces but struggled to meet in the middle. Lane’s character brought humor to the production. It is safe to say that he was the light of the show.

If you missed the show, you missed out on an amazing production. If you have never read or seen the play before, there is a film with Elizabeth Taylor in it. But, the entire cast put the film to shame.