Standing at 7 feet tall, weighing 500 pounds, a bird-like, nameless creature has been on display in the Carnegie Museum of Natural History for 10 years.

But after a March 19 article in a scientific journal PLOS ONE, the dinosaur finally got a published description and name.

Anzu wyliei, named after Anzu the feathered demon from Mesopotamian mythology and Wyliei Tuttle, the grandson of the chairman of the museum’s board of trustees, has been called the “chicken from hell” by assistant museum curator Matt Lamanna, though he admits to not coming up with the moniker.

“[It] really does look kinda like a really big freaky chicken,” Lamanna laughs.

Anzu was one of the last dinosaurs to exist according to Lamanna, living at the very end of the Mesozoic Era, between 68 and 66 million years ago. The oviraptorosaur that stands in the Dinosaurs In Their Time exhibit existed around the same time Tyranansaurus Rex did. They both came from the same place: Hell Creek rock formation, which spans along the Dakotas and Montana.

Tyler Lyson found one of three specimens of Anzu in 1999 on his uncle’s ranch in Southwestern North Dakota. The paleontologist from the Smithsonian Institution’s National Museum of Natural History was part of a four-person team who worked on Anzu, with Hans-Dieter Sues, from the Smithsonian, Emma Schachner of the University of Utah and Lamanna.

“We spent just over a decade working on this project. Describing a new species of dinosaur, or any animal for that matter, takes a long time,” Lyson said. 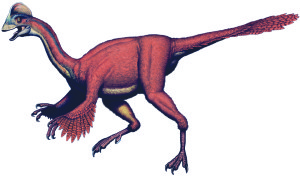 The process started in 2004 when Lamanna and the museum acquired two of three specimens of Anzu from a commercial fossil hunter who had found the fossils in the late 90’s in South Dakota. Lamanna asked Sues, who had just left the Carnegie to help him in the research of the new fossil.

At an Ottawa paleontology conference in 2006, the duo saw a poster for a presentation on the discovery of oviraptorosaur from the Hell Creek formation by Lyson and Schachner. Lamanna was suspicious of the discovery.

It turns out they had a connection: Anzu.

When bones combined from all three Anzu specimens, about 75 percent of the skeleton is represented, according to Lamanna.

“These things don’t come with instruction manuals and it would have been easier if they did,” Lamanna joked. “Unfortunately it took way too long. But eight years later here we are.”

According to Schachner, Anzu had a massive crest on its head much like a cassowary, a flightless bird from New Guinea, and looked very bird like. It also likely had feathers and lived in a humid river flood plain.

“Most descriptions of the appearance, beyond what you see in the skeleton are speculative,” Schachner said.

Lamanna suspected the cross between an ostrich and velociraptor had really long arms and huge hands. The interior claws were 6 or 7 inches with nails and immediately brings the idea of an eagle to Lamanna. It also probably was an omnivore.

“If I had to bet, Anzu ate a lot of plants, 75 percent of the time,” Lamana said. “[But] If it saw a lizard running by, wouldn’t resist the chance to eat and swallow it whole.”

With the discovery and research on Anzu, it gives paleontologists some insight on a sub group of the oviraptorosaur. Caenagnathids are much less known than the oviraptorids, who have been well known for over a century.

The more you know about the skeleton about given dinosaur, the more you can learn about the dinosaur itself, according to Lamanna.

“Little bits and pieces of these animals [caenagnathids] had been found. Enough to know they were there, but not enough [to know] about them,” Lamanna said.

With the discovery and information gathered from Anzu, the implications it has for paleontology are vast.

“Anzu is from a geologically very important time interval – that moment in time right before dinosaurs go extinct,” Lyson said. “So adding yet another dinosaur species to the very end of the Cretaceous Hell Creek Formation provides more evidence that dinosaur diversity was doing fine and that dinosaurs died catastrophically as a result of the asteroid impact at the very end of the Cretaceous.”