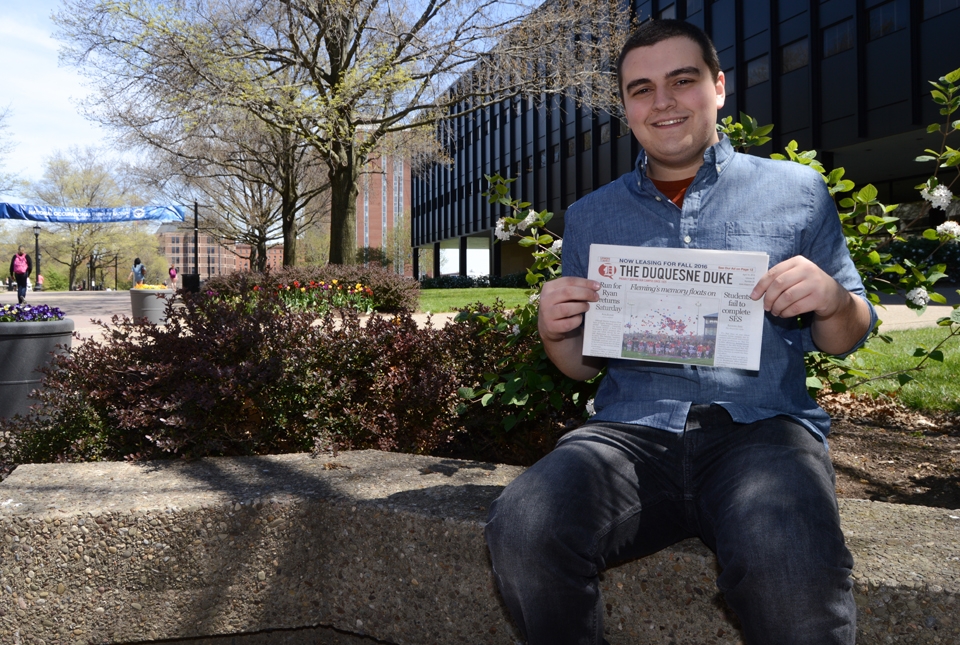 For four years I’ve been thinking of what to write in this column.

That’s because, as humans, it’s easy to obsess over time. We often focus on the end of the road instead of the path it takes to get there, only to get to the end and wonder, “Where did all that time go?”

The truth is, there’s not enough space in this newspaper to record how I really feel about leaving Duquesne and, most importantly, leaving the family I have been a part of at The Duke for 120 long, grueling issues.

But I can tell you this assuredly: I don’t want to write this column.

I want to go back to freshman year when I first wandered into the offices of The Duke on the first floor of College Hall. Back when I didn’t know anybody, and they certainly didn’t know me.

The only thing I did know was that I wanted to write, no matter what it was about. New printing quota in the Gumberg? I’ll take it. Big volleyball match at the Palumbo? I won’t let you down.

Adapting to college life isn’t easy – it’s controlled chaos. You have to make new friends, find a way to feed yourself and figure out who you want to be as a person. I was lucky enough to find all of those things in the newsroom.

So I never missed a meeting. And I tried never to miss a deadline (sorry about that one time, Wes.) I was named news editor as a sophomore, kept that job for two years and then moved on up to be editor-in-chief.

And now, it’s one of the last times I’ll ever be in this newsroom, and I really don’t want to write this column.

I want to remember what it felt like to cover the “big” stories, the ones that started important conversations on campus. The ones that kept me up all night writing, confining my sleep to quick power naps on the ant-infested couch – which has since been heroically discarded from the newsroom.

Newsrooms, no matter the shape or size, are where I belong – because I love chasing that elusive feeling. I chased it at the Pittsburgh Post-Gazette last summer, where I spent more time at crime scenes than in my Brottier apartment. I’ll chase it again after graduation at the Wall Street Journal in Washington, D.C, where I’ll cover the presidential election.

But there’s something special about this newsroom here at Duquesne. Every year, we build a new family from new editors who replace old graduates. Nobody wants to be replaced – including me – but I have been blessed with the best staff anyone could ask for. They’ll be just fine.

The saddest part about leaving the newspaper is that we’ve built something incredible here this year. My staff pursued stories that mattered, boosted readership and won several awards from the Pennsylvania News Media Association and the Society of Professional Journalists.

I’ll miss making airplane jokes about Bobby – our fantastic adviser who has taught me so much about being a good journalist. Thank you for that, Bobby. I’m sorry for all the frantic phone calls over the years.

I’ll miss the journalism department, and especially Dr. Mike Dillon, who has been a mentor to me since I was a freshman. You once told me you admire my “sticktoitveness.” I admire your dedication to the craft.

I’ll miss the days when – no matter how many nasty phone calls I got about a story I wrote – I could still count on my family to give me words of encouragement. It was my dad who first taught me the importance of writing a fair and honest story (the story was about Joe Paterno. See, I remember.) It was my mom who always made sure I didn’t look like a slob for job interviews.

And to Megan, thanks for being there for me from the beginning. I owe so much of my success to you.

Most of all, I’ll miss seeing my name in print in The Duke. That’s why I didn’t want to write this column. I don’t want this to be the last time.

By David Borne | Staff Writer In just their third head-to-head meet of the season, the Duquesne Dukes swimming team took down the Toledo Rockets by a score of 159-100, which improved its record to […]

March 3, 2017 The Duquesne Duke Features Comments Off on Atypical A-Walk: Warm temperatures come to the Bluff

By Claudia Hardy | Staff Writer ‘Tis the season for February weather, a time when folks anxiously wait for warmer temperatures and clouds that are not so heavy with snow. Every winter has its random […]