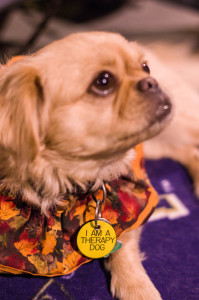 Every Tuesday night during the academic year, the first floor of the Cathedral of Learning at the University of Pittsburgh is crowded, by some who have two legs and some with four.

The College Canines program, started by former Pittsburgh public school’s teacher Marsha Robbins, bring therapy dogs into the 42-story building on Tuesday nights from 7 p.m. to 8 p.m. and is open to the public. The program was Robbins “brainstorm.”

“I had animals when I was teaching. I saw the value: stress reduction. They facilitate friendship, you know. It’s a social lubricant for kids who don’t fit in. Everybody knows when you go to college it’s hard,” said Robbins, humane educator and lead trainer at Western Pennsylvania Humane Society

On this Tuesday, there are less visitors than usual, a “light week” according to Robbins. The group usually sees hundreds of students and passers-by. Last week for their Halloween costume party. The dogs were dressed in costume and the group saw 400 to 500 people.

The program is in its 10th year. In its first three years, handlers would walk their therapy dogs outside the building and stop to let people pet them, according to Robbins. They moved indoors after received sponsorship from a student organization, Women for a Multicultural Tomorrow, needed to reserve the Cathedral.
A program has been attempted at Duquesne but never came to fruition. Once a month, the group also takes a smaller group of dogs into the psych ward at UPMC Mercy, Robbins said.

Studies have shown that dogs can lower blood pressure, increase focus, alleviate loneliness and decrease physical and emotional pain, according to Robbins.

Ph. D. researcher L.J. Sparvero comes over to Robbins and her dog Ming Foo, a four and a half year old Pekingese poodle. Sparvero has been visiting the Colleges Canines for five years and makes a point to come every Tuesday, when work allows.

“It’s so good. I don’t have dogs where I live. Just being able to see all these dogs and spend a little bit of time with them … it’s definitely something I’ve enjoyed over the years,” Sparvero said. 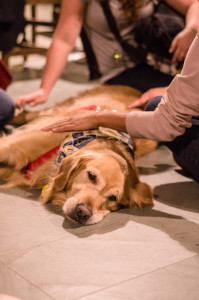 If dog handlers need someone to watch their dogs for a minute, Sparvero lends a hand.

Honeybear and her owner, Gladi Carlen of Crafton have been coming to the program for five years. It’s the smiles of visitors that brings them back.

“It’s nice to see people when they’re down in the dumps,” Carlen said.

Students pet the mostly black dog, with some light hair near her ears.
“She’s in demand, aren’t you Honeybear?” Carlen said. “She’s very relaxed as long as you don’t have a mailman’s uniform on.”

During mid-terms and finals, students come on the verge of tears, Robbins said.

“They come, they lay on the floor with the dogs and they leave thinking ‘life is good.’” 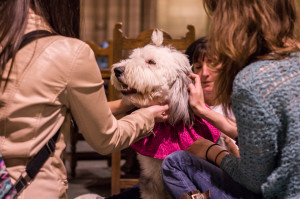 “It’s really rewarding,” Couch said. ”It’s a volunteer program so we volunteer our time bringing the dogs, travel. Just to see people smile at the end of it, you know. See the joy it brings to people.”
Besides College Canines, Couch and Oslo have visited libraries, nursing homes and the Children’s museum in North Side.

“That’s the thing about therapy dog work, once you get certified you can choose where you want to go”

Sometimes, handlers would like to take a week off, but they could change visitor’s evenings.

”There are some nights where we would rather stay at home and put our feet up, but this is an opportunity to make a difference in someone’s life,” Robbins said. “How often do 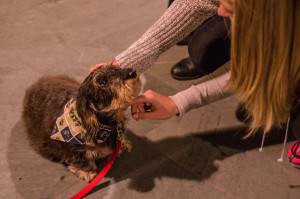 you get that opportunity?”