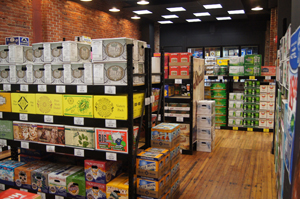 Under Corbett’s plan, $1 billion from the process would be used to create the Passport for Learning Block Grant, which would grant flexibility to Pennsylvania’s public schools and allow them, instead of the state government, to decide what materials their students need.

“Our proposal is part of my commitment to changing Harrisburg, streamlining government and moving Pennsylvania forward,” Corbett said in an announcement video. “Our plan gives consumers what they want by increasing choice and convenience, and helps to secure our future by adding $1 billion in funding toward the education of our children, without raising any taxes.”

Privatization would allow grocery stores, pharmacies and convenience stores to sell alcohol. Currently, Pennsylvania and Utah are the only states that have fully state-controlled liquor systems.

“I want Pennsylvanians to enjoy the same convenience that virtually every other American has today. My plan gets the state completely out of the liquor business,” Corbett said. “The state will no longer be a marketer of alcohol; instead, it will now focus on its role as a regulator. It also creates an unprecedented opportunity for economic expansion for private sector employers while remaining revenue neutral for the state.”

The state’s amount of wine and liquor stores would double, from 600 state stores to 1,200 stores with the ability to sell alcohol.

Steve Klein, owner of Save Mor Beer & Pop Warehouse at 4516 Browns Hill Rd., said he thinks the plan if instituted “possibly could” adversely affect his business.

“Beer is 80 percent of my business and you want to give the ability to sell that product to everybody?” Klein said.

But Klein said his finances could be impacted the most by the addition of more licenses distributors would have to purchase.

“The cost of the three or four licenses introduced, it seems like the distributors get a raw deal,” Klein said. “They want to charge a distributor 10 times more for a license than a grocery store. I don’t see how that could be fair.”

Jake Nickman, owner of Buddy’s Brews at 2112 E. Carson St., agreed with Klein, but said he is not “quick to overreact.”

“It could impact the business negatively and I would probably lose some business on beer, but I could gain on wine and liquor,” Nickman said.

Nickman said Buddy’s Brews is not authorized to sell wine and liquor and that its business is made up of 99 percent beer sales. He also said that he does not foresee the business taking a substantial hit due to its location.

“On New Year’s here we had a half-hour wait,” Nickman said. “There’s plenty of drinking that goes on around here. College kids, people from all around the city come here, so I’m not too worried.”

He also said he is not concerned with the possible plan because the state has been trying to form similar legislation since the 1980s.

“I honestly don’t think it’s going to happen,” Nickman said. “They’ve been trying this for 30 years and it’s never gotten anywhere. So, it’s pretty much, ‘I’ll believe it when I see it.’”