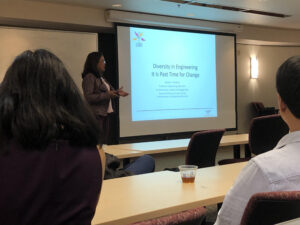 Women in Science at Duquesne University recently hosted Bevlee Watford from Virginia Tech to hold a discussion on diversity in STEM fields. Watford’s seminar, titled “Diversity in STEM: It is Past Time for Change,” focused specifically on the number of women and minorities in the field of engineering.

Watford, a professor and associate dean at Virginia Tech, is also the executive director for the Center for the Enhancement of Engineering Diversity. This center was founded in 1992 as a way to increase the number of underrepresented students in the engineering and STEM programs at Virginia Tech, as well as making sure those students were getting the assistance and support they needed.

Watford started the seminar by asking the audience what diversity was to them. Many of the answers included gender, race, socioeconomic background, religion and intellect.

“There are a lot of aspects to diversity,” Watford said. “It’s not just race and gender.”

Physical ability, language, experiences, job level and thinking styles were some of the others Watford listed.

Intersectionality was also a major focus of the beginning of the seminar. Intersectionality according to Watford, is the idea that each individual has different types of traits and attributes that play into how a person acts, operates and behaves.

Watford went on to say that incorrect research conclusions were being drawn that were because they were assuming a single dimension of people, rather than acknowledging that a person is made up of many different characteristics.

The way people are identifying is changing, according to Watford. In surveys, there is now the presence of a “two or more race” category, which was not previously seen.

The problem for STEM becomes that “women and minorities don’t often see engineering as a pathway,” Watford said.

In high school, females participate in math and science courses at the same rate as their male counterparts. However, males in engineering courses are at about 21% while females are at 8%.

Those trends carry on into colleges and universities, as well. Women make up half of the bachelor’s degrees in biological sciences, but only 20% in engineering, 18% in computer sciences and 39% in physical sciences.

Watford went on to explain that this can be related to cultural shifts.

In the 80s there were more women than men pursuing computer science, but in the years after that their numbers went down. The cultural shift, Watford said, was that computer games came out. They were marketed heavily toward men, i.e. the GameBoy. After that, men started to become more involved in computing and developing games, while women went toward the social sciences.

The problem doesn’t just stop at education; it also spreads through the workforce.

Women make up half of the college-educated workforce, but only 28% of the science and engineering workforce.

“In engineering, and STEM in general, we need to have an ample supply for our future needs.” Watford said. “The bottom line is we don’t have enough people, I don’t care what kind of people they are, we don’t have enough. It’s pervasive no matter what; we are not producing enough STEM students across all races.”

The workforce need in computer-related professions has been steadily increasing over the last few years. With the programs started by Watford at Virginia Tech, she hopes to meet that need with graduates.

“At least we are recognizing the problem, because for years we didn’t,” she said.