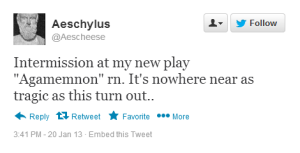 Several days ago, I happened to come across an opinion piece in The New York Times titled “What Would Plato Tweet?” As I expected, what followed was a wearied screed against the triviality of social media. The author, Rebecca Newberger Goldstein, proudly discussed her lack of knowledge of Twitter, Facebook and Instagram.

She was faux-confused when fellow patrons of a health-food restaurant photographed their plates for their Instagram feeds. She then wrote at length about her extensive knowledge of the ancient Greeks.

Impressed? I wasn’t either.

Interestingly enough, Goldstein does have a twitter account: @platobooktour. One of her tweets reads thus: “Is tweeting beneath me? Nonsense! Philosophy doesn’t live in treatises but in the give & take of many points of view reacting to each other.” Well, you could have fooled me.

Socrates himself uttered the famous line, “The unexamined life is not worth living.” Well, guess what? Life has a certain weight, of course, but it also consists of delicious meals out, of our friends grinning after a pleasantly boozy evening, of inside jokes and our pets wearing sweaters.

The world is a sad, serious place. The lightness and blithe cheer plastered across the various walls of social media can help us unwind a little bit. Plus, you really can’t beat the pure expansiveness and information offered by various social media networks.

But if you’re not convinced, let’s spend a minute discussing a piece of classic philosophy. The Allegory of the Cave, propounded by the mighty Plato himself, describes a world in which a group of prisoners trapped in a cave merely see shadows on the wall, and interpret the shadows as facets of reality, when, of course, they are not. The philosopher is the one who moves up through the cave, unchains himself, gives himself a good shake, ventures into the unknown and is rewarded by the warmth of sunlight.

In this age, the major realm of exploration is taking place on the Internet. More information and content from all corners of the world is now available to anyone with an Internet connection.

Want to get some perspective on the Russian crisis through the eyes of an actual Russian rather than attempting to peer through the distorted lens of your own countryman’s perspective? Follow a foreign journalist on Twitter, Facebook or Instagram. Want to know what Lady Gaga is doing? You can follow her on all forms of social media. It’s not like when you had to read tabloids and newspapers to find out what Patsy Cline was doing in the 1950s.

If you shun social media and its many avenues of discovery, you’re essentially chaining yourself to the wall of the cave. Go ahead, cut yourself off; you’ll be watching shadows while the rest of us keep learning, and thus growing as moralists, theorists and human beings.

I’ve been an avid reader and learner for my entire life, and I’ve found Twitter to be an excellent resource. Not only can I find news, but I can read quite a bit of the best comedy I’ve ever come across (check out @robdelaney or @NightValeRadio), gut-wrenching 140-characters-or-less statements of truth (see @annabelle_nyst) and information and tips concerning my area of study: journalism, graphic design and public relations (@tutsplus, a free tutorial site). I’ve seen stunning photos of places I’ll likely never see in person due to the rising costs of travel. I’ve read beautifully-written articles netted via Twitter links which have inspired me. I’ve browsed article comment sections, which have the unique power to immediately involve the reader in a discussion — there’s nothing more democratic than the Internet.

then to remind ourselves that we are not merely invisible rabble?

If Plato and his fellow Greeks had access to the Internet, and to Twitter, you can bet they’d be tweeting away. Aeschylus would Instagram set photos of his latest plays, and Aristotle would deliver sharp-tongued epithets in 140 characters or less. Dorothy Parker, queen of witty humor, would be tagged in dozens of drunken friend-selfies. If John Milton were around to see the age of Facebook, he’d be clicking away all day, his dream of the Marketplace of Ideas finally realized.

Kate Dillon is a senior journalism major and can be reached at kdillon1965@gmail.com

Acting professional in the real and virtual world

September 12, 2013 The Duquesne Duke Opinions Comments Off on Acting professional in the real and virtual world

By Courtney Downing | Student Columnist In an era where people are connecting more and more through social media, personal relationships seem to be forgotten. Sure, it’s easy to add someone on Facebook or send […]

Raymond Arke | News Editor 10/19/17 Duquesne is mourning the loss of one of their own after the sudden passing of Leslie Rubin, a former long-time political science professor and wife of current political science […]