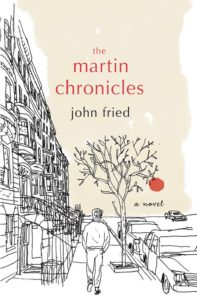 After 10 years in the making, John Fried published his very first novel, The Martin Chronicles.

Fried is an associate professor in the English department at Duquesne. He teaches creative writing, but currently, Fried is teaching at Duquesne’s campus in Rome.

Published in January 2019 by Grand Central Publishing, this novel, which first started as a series of short stories, hit the shelves to tell the story of Marty Kelso, a young boy growing up in Manhattan.

The story takes place in New York City and revolves around Marty’s coming of age. The novel walks through his life in the 1980s from ages 11 to 17 and follows him on a journey through his first kiss, first love, first enemies and first death.

The most important lesson Marty learns is that the world is not as safe and sound as he originally thought it was. Written through the eyes of Marty, readers are able to see what it is truly like to live as a young boy, experiencing all of the hard and important moments in his young life.

“I’m originally from New York City, but the book is not a memoir. I draw on my experiences as a kid growing up there, but the story is fiction,” Fried said.

Although The Martin Chronicles was Fried’s first novel, he has published many other pieces, mostly short stories. Working as a magazine writer, he has been published in The New York Times Magazine, The Rolling Stone, Real Simple and other works. He has also published many short stories in different journals, which is where the story of Marty started. The chapter “Birthday Season” from his novel first appeared in Columbia: A Journal of Literature and Art.

“After, I wrote a bunch of other stories, but I kept coming back to Marty as a character and wrote [and published] two more stories. That’s when I started to see there might be a whole book following Marty through his adolescent and teen years,” Fried said. “I never started a story knowing exactly what was going to happen. Rather, it’s always best when I feel the character takes over and becomes his own person.”

In order to publish his novel, first, he found an agent to look for a publishing company for his novel. From there it was smooth sailing, and his novel quickly went through the editing process.

Stephen Chbosky, author of The Perks of Being a Wallflower, called Fried’s book “a beautiful debut. The Martin Chronicles transforms a series of adolescent snapshots into a raw, unforgettable mosaic.”

The artwork on the cover of the novel features a young boy walking through a colorless big city. The only thing colored is a large apple that hangs from a tree. Although Fried did not have a lot of control over the cover, he is happy with how it “captured the youth of the character” and also feels “timeless.”

“In terms of giving advice, I would just say that this book took me a long time to write. Nearly 10 years. So the key is to persevere and keep working on your project, even when you get discouraged or frustrated,” Fried said. “There were a lot of times when I wasn’t sure if I could finish it or if it was any good. But you have to just keep going on and believe in your project. The most successful writers I know are the ones who just refused to give up.”

Fried’s book can be bought on Amazon or at johnfried.com.