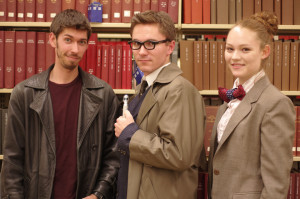 The Doctor began his journey in 405-line black and white broadcasts from the BBC in 1963 and has survived to be broadcast around the world in 1080i HDTV.

On Saturday, in a global simulcast, Whovians, or fans of the British Sci-fi drama Doctor Who, will celebrate 50 years of traveling through time and space with the Doctor.

Locally, the Doctor Who 50th Anniversary Special will broadcast at 2:30 p.m. Saturday on BBC America (with a rebroadcast at 7:00 p.m.) and stars Matt Smith as the 11th (current) Doctor, David Tennant reprising his role as the 10th Doctor, John Hurt as the mysterious War Doctor, Jenna Louise Coleman as Clara (the Doctor’s current companion), Billie Piper is expected to return as Rose, and, with the recent release of a unexpected minisode starring Paul McGann as the 8th Doctor, there are sure to be more surprises in store. Tom Baker has claimed that he will make an appearance as the 4th Doctor (considered the most popular in the show’s run), but the BBC has declined to confirm the report.

The show has garnered a following on Duquesne’s campus.

To celebrate the 50th anniversary, the Gumberg Library hosted a Doctor Who fan event entitled “DUQtor Who.”

“Welcome to ‘DUQtor Who,’ also known as: Nerds No-Longer-Anonymous,”assistant English professor Anthony Adams said to open his discussion at the event. Duquesne’s Whovians were well represented at the event which featured paper TARDIS crafting, a poster raffle and a costume contest, alongside of Adams’ discussion.

“We wanted a program that would attract students to fun part of it, but also think about what we learn from Doctor Who? Is there another meaning?” said Gumberg Library director of information services Diana Sasso. “We love Doctor Who not just because it’s a cheesy, entertaining program, but it touches on really important themes in society.”

Sasso coordinated the even that brought Duquesne’s Whovians, many of whom were fans dressed as their favorite Doctor or companion, to the library to share their excitement for the 50th anniversary special and to participate in the feature discussion.

The Doctor is a renegade Time Lord (an alien race from the planet Gallifrey) who has spent almost 1,000 years adventuring through space and time in a time machine called a TARDIS with various human companions. Time Lords have this quirky ability to regenerate, so instead of dying, they burn through energy and build themselves a new body (which is a clever way of being able to repeatedly change your lead actor).

At some point following the Doctor’s 8th regeneration, the Last Great Time War between the Doctors and the Daleks (a race of genetically manufactured warrior supremacists) broke out and threatens to consume the whole Universe. The 50th anniversary special centers on this conflict, during which, the Doctor wiped out both the Dalek race and all of the Time Lords (This may seem like a spoiler, but it has been an important plot point of the show since 2005).

The Doctor’s story has been told in two segments: the original series (1963-1989, 1996; Doctors 1 through 8) and the series revival (2005-2013; Doctors 9-12).
Adams’ discussion highlighted that the character of the Doctor has grown throughout modern history. Beginning in the 60s, the original Doctor was a pacifist. Adams showed a clip from the 12th season of the original run of Doctor Who. Tom Baker’s Doctor (4th incarnation) was ethically unable to prevent the creation of the Dalek race despite knowing that they would lead the universe to war. This character’s values stand in stark contrast to John Hurt’s recently created War Doctor that will (barring any plot-twists) commit genocide against both Daleks and Time Lords in the 50th Anniversary special.

“Doctor Who is so very imaginative, and the potential keeps it growing and growing,” adjunct reference / instruction librarian Jessica Smith, who helped coordinate the event. “With each new Doctor comes a different vibe. People can hate one Doctor and thrive on another.”

BBC America will be running Doctor Who programming all day until the simulcast of The Day of the Doctor on Saturday.