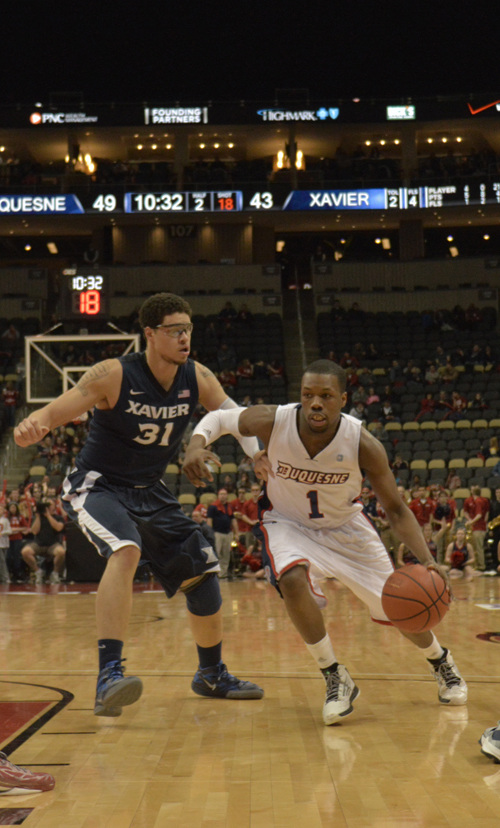 Basketball is a game of ups and downs, and unfortunately, for the 11th straight time, it’s all downs for the Duquesne men’s squad. After a 73-65 loss against Xavier on Saturday night at the Consol Energy Center, it’s unclear whether or not the Dukes have the charisma to win another game from here on out.
Of course, coach Jim Ferry believes they do.
“They kept their head up. It’s a resilient group for a group that is going through some hard times,” Ferry said. “And it ain’t going to get any harder than it is right now. It’s not. Ever.”
At least there’s assurance from the coach, even though it sounds all too familiar. A month ago, when the losing streak was only at four, the same aura of positivity was in the air.
“If we play this hard, we’ll win some games in this league,” Ferry said on Jan. 12, after losing another of those hard-fought battles against Saint Joseph’s.
As the Dukes wait longer and longer for one of those wins, the positivity is dwindling, especially after Saturday night.
To come away with a hard-fought loss on the night of the fourth annual Chuck Cooper Classic, when Mikey and Big Bob from 96.1 Kiss FM are in the Red and Blue Crew, is one thing.
But what’s really hard about losing is letting the game slip away when select players are giving it their all and a standout performance. Freshman forward Quevyn Winters dropped a career-high 19 points, and senior forward Andre Marhold shot 100 percent from the floor and grabbed 10 rebounds, one game after coach Ferry asked for more out of his seniors.
If only more players could put forth that kind of effort. Though Winters couldn’t have played a better game, he spoke for his team after the game, echoing the same exact phrase that has been preached dozens of times before.
“We just couldn’t make shots,” Winters said.
It’s more than that.
It’s about playing with consistency over the entire 40 minutes. In a game that saw ten-point leads from both sides, Duquesne managed to tell a tale of two entirely different teams, flipping the switch at seemingly random times to sample both.
When leading by ten points with 12:54 remaining in the game, before allowing the Musketeers to go on a 21-4 run in the next seven minutes, the Dukes were playing with the same charisma, the same alluring style, displayed in their upset over West Virginia in December.
They were making their shots. They were controlling the boards, setting up plays and playing tight defense.
But a majority of the first half, and the end of the second, starred the same Dukes from the previous ten games. These players took bad shots, turned the ball over too often and failed to get to the free throw line. They missed the defender in the middle while passing the ball across the court. They disregarded the extra 26 seconds left on the shot clock.
The list goes on.
And alas, this was the style that prevailed in the end. It’s frustrating, because these Dukes have heart.
But time and time again, heart doesn’t translate to victories. Ferry’ s unwavering confidence doesn’t either. If it did, then maybe the Dukes wouldn’t have to stand alone as the only winless Atlantic-10 team in conference play.
Then, still maybe, it wouldn’t be a season to forget. Maybe then this season could be something better.

Photo: Connor Hancovsky / For The Duquesne Duke |
Derrick Colter dribbles the ball and prepares to pass for the Dukes in their 73-65 loss to Xavier on Saturday at the Consol Energy Center.