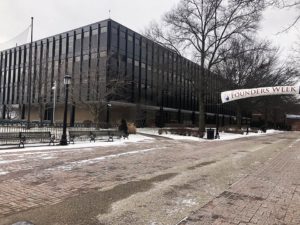 A Duquesne University professor is heading up a program designed to help kids who live in high risk areas for asthma.

Jennifer Elliott, an associate professor in the Duquesne Mylan School of Pharmacy, is teaming up with Pediatric Alliance physician Deborah Gentile to implement school-wide asthma screenings for students. The program aims to ensure that any child found with asthma gets the care and education they need to manage the condition.

Funding from the Heinz Endowments and the Jefferson Regional Foundation made this project feasible for schools interested.

The South Allegheny, Clairton, Northgate and Woodland Hills school districts, along with Propel-Hazelwood charter school, implemented the screenings in September as part of a back-to-school process.

A four-question survey is given to parents that will help determine if their child has asthma, and if so, if it can be controlled by medication.

A previous study conducted by Elliott and Gentile found that asthma is especially prevalent in western Pennsylvania. The study, based at Allegheny Health Network, found that of more than 1,200 western Pennsylvania school children, 24 percent suffered from asthma. The nationwide average is 8.3 percent, as reported by the Center of Health Statistics.

Out of 2,338 children screened in the program this year, 526 of them are expected to screen positive for asthma and of those, 315 will have poorly controlled asthma.

Additionally, the study found that asthma was more common in African-American children, and those on public insurance.

Children with asthma experience their lungs and airways becoming inflamed when exposed to triggers, such as inhaling airborne pollen, or catching a cold or the flu. Another trigger of asthma is air pollution.

Elliott also found that asthma is one of the top causes as to why kids miss school.

According to Elliott in a Duquesne press release, “Asthma is one of the top causes of missed school days, which can have a negative impact on a child’s ability to learn, be active and develop healthy peer relationships.”

“In past studies, we’ve found that approximately 15 percent of parents may not even know that their children have asthma. School-based screenings can help ensure children with asthma receive the treatment they need earlier to live healthier lives,” Elliott said.

According to the Pittsburgh Post-Gazette, the Clairton community in particular has a heightened awareness of air quality and air pollution. The nearby U.S. Steel Clairton Coke Works is often cited as the major source of sulfur dioxides and airborne particulate matter emissions that exceed federal standards in the Mon Valley.

Recently, Mon Valley residents were urged to limit outdoor activity due to air quality concerns after a Dec. 24 fire at Clairton Coke Works.

All 820 students in the Clairton school district, from elementary to high school, will be screened for asthma in this program.

In the earlier study, Dr. Gentile told the Pittsburgh Post-Gazette that asthma cases declined in the Northgate School District after the closing of DTE Energy’s Shenango Coke Works in 2015.

Additionally, the 2018 State of the Air report, compiled by the American Lung Association, scored Pittsburgh and Pennsylvania poorly for air quality. Pittsburgh, Lancaster, Johnstown-Somerset and Philadelphia were the Pennsylvania regions listed as the top 25 for most polluted areas by “year-round particulate pollution.”

“The screenings mark the beginning of a larger push to make asthma screenings available for all schools in the Pittsburgh region and eventually Pennsylvania,” Elliott said in a press release.

Correction: An earlier version of this article mistakenly mentioned that funding for the project came in part from the Breathe Project. The article has been updated.