So many horror sequels, remakes and reboots have failed to live up to the expectations built by their predecessors. After countless hours of rehashed plots, characters, settings and scares from these films over the past decade, it took Evil Dead just an hour and a half to show them all how it should be done. 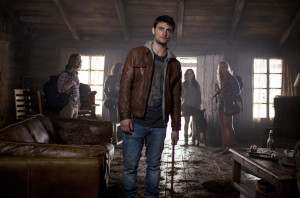 Set in a similar cabin as the one seen in the original, Evil Dead focuses on recovering opiate addict Mia (Jane Levy), her brother David (Shiloh Fernandez), his girlfriend Natalie (Elizabeth Blackmore) and their two friends Eric (Lou Taylor Pucci) and Olivia (Jessica Lucas). Mia and David have a tense relationship due to David’s abandonment of Mia and their mentally-ill mother, which left Mia alone to care for her until she passed away.
After starting a detoxification attempt, Mia leaves the cabin and strays into the surrounding woods while Eric pronounces an incantation written in a book, the Naturom Demonto, they found in the cellar, releasing an evil presence that attacks Mia and, by gruesome means, possesses her. After returning to the cabin, Mia attempts to detail whatshe had experienced, but they disregard her warnings as an attempt to get out of another detox.

The film starts in a similar fashion to the original and much of Evil Dead is a spot-on scene-by-scene remake of The Evil Dead. But while that would be a major source of complaint in other horror remakes or reboots, it works perfectly in this case. Everything is much bigger and more grandiose in this remake/reboot than in its 1981 counterpart, making scenes that are practically exact repeats from the original seem completely original.
In fact, although the films are strikingly similar as far as the story and scares are concerned, they are really incomparable because they are both stellar representations of where the horror genre stands now compared to the early 1980s. The original is a wittier, grittier and probably more horrifying movie based on the gruesome makeup, grainy texture and intelligent use of camp the film showcased. On the other hand, Evil Dead is much more visual, crisp and agonizingly gruesome due to improved special effects and great use of digital imaging.

Someone who has a weak stomach might want to stay away from this one. For those who can handle it, this movie has some of the most cringe worthy moments ever put on screen, from an arm being sawed off with an electric knife to a tongue being run across a box opener, creating a snake like divide down the middle. This formula is clearly not for everybody, but there is no denying that the film’s visuals are golden. Probably the only real gripe about the film is that there are some scenes that are just physically impossible (like a character literally pulling their own forearm off), but that is easily overlooked.

But if the remake was simply a successful scene-by-scene modernization and nothing more, it would still serve as a slight disappointment. Where Evil Dead shines is in the small, and one not so small, tweaks that make it quite the departure from its predecessor by the time the credits roll. There are several moments that are guaranteed to leave even the most dedicated horror fans guessing, which is very refreshing coming from a film that by definition is unoriginal.