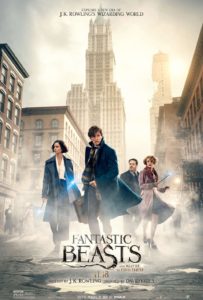 The magic of “Harry Potter” was reignited on the big screen when “Fantastic Beasts and Where to Find Them” hit theaters on Nov. 18. A prequel to the immensely popular franchise, the movie became an instant classic for both new and old generations of fans. The film gives a first look at the wizarding world in America long before the days of Harry Potter.

Set in New York City around 1926, “Fantastic Beasts” follows the story of the quirky British wizard Newt Scamander, portrayed by Eddie Redmayne. Scamander is an easily lovable character that cares for many misunderstood magical creatures and is planning to write a book detailing where to find them, as well as how to properly care for them.

Though the story follows several connected storylines, the main focus is on Scamander attempting to find his creatures that were accidentally set free from his suitcase by Jacob Kowalski, a “No-Maj” (the American version of a “muggle,” or non-magical person) played by Dan Folger. This leads to them encountering various ordeals throughout the city in order to find them, often acquainted by former Auror Tina Goldstein, (Katherine Waterson,) and her sister Queenie, (Alison Sudol.)

Also playing a major role in the film is the interference of the Magical Congress of the United States of America, similar to England’s Ministry of Magic. The Congress is strictly against both the keeping of magical creatures, which it views as being extremely dangerous, as well as letting non-magical people have any knowledge of magic. Throughout the movie, it also attempts to discover what is behind the destruction of various buildings in the city and the murder of a senator, eventually being led to believe that Scamander’s escaped creatures are behind it.

The New Salem Society, based off of the persecution of witches in 1690s Massachusetts, is a group of “No-Majes” convinced that witches are behind these attacks. Scamander reveals to the Magical Congress that the mysterious attacks are actually being caused by a highly powerful Obscurus, a dangerous entity developed from a child containing their powers for too long, and that they need to find the child in order to stop the attacks from occurring again.

The over-the-top special effects in “Fantastic Beasts” juxtapose those in the “Harry Potter” movies nicely, with a multitude of adorable creatures and other magical effects, from wand fights to magically-expanded suitcases, that greatly enhance viewers’ enjoyment. The inclusion of multiple environments, such as the Arizona desert and arctic tundra for the creatures that live in Scamander’s suitcase, also makes for an interesting scene. These environments show the extent of the filmmakers’ special effects abilities.

Adding to the movie’s lasting impression on the audience, the wide camera angles coupled with numerous impressive shots of iconic locations in New York City — including Central Park and the Macy’s department store — play humorously on the bustling environment of the city during the 1920s. The major battle scene also takes place at a subway station, where we finally learn more about the whereabouts of wanted wizard criminal Gellert Grindelwald, who is mentioned briefly in the beginning of the movie and is played by Johnny Depp. The film’s surprise ending excites the audience and ties up loose ends with the movie’s multiple conflicts.

“Fantastic Beasts and Where to Find Them” is a captivating addition to the world of “Harry Potter” while still distinguishing itself as its own individual series. With an abundance of interesting plot lines that leave the audience wanting more, the four additional planned installments of the film look promising. This action-filled yet charming movie will have you immediately hooked on all of the new magical adventures from the mind of J.K. Rowling.

September 27, 2018 The Duquesne Duke News Comments Off on Duquesne SGA votes to release 2018-19 budget to public

Raymond Arke | Asst. News Editor When John Le Beau was a second lieutenant in the Army stationed in Fort Hood, Texas, he received a mysterious phone call. “I received a call, ostensibly from the […]

by Caroline Kucko | staff writer April 28, 2022 Concert season is in full swing in Pittsburgh. From country to hip-hop, this summer promises live music from a wide variety of genres, according to various […]