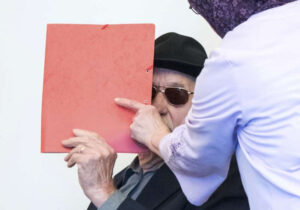 “You can run on for a long time, but sooner or later God’s gonna cut you down.”

Ninety-three-year-old Bruno Dey is being tried in juvenile court for crimes he committed when he was 17 and 18 years old at Stutthof concentration camp. Dey was a guard at the camp during the Nazi regime. He was an alleged accessory to 5,230 murders. Dey didn’t commit any of the murders himself, but he did stand by and let them happen. Dey could very well be the last Nazi put on trial.

When I first read the article, the first thought that popped into my head was “what’s the point?” My second thought was that he was just a kid when he was a guard and was simply just following orders. It was his job, right?

Well, maybe, so but that’s very flawed logic. If you stand by and let thousands of people die by your coworkers’ hand, then you’re an awful person.

The second thing is, well, he was just a kid. Yes, he was only 17, but he would have had to be an insanely immature 17 year-old to not know that what he was doing was wrong.

Bruno Dey is a guilty man but is he too old? Should we let bygones be bygones? My first instinct was to say yes. I just couldn’t see the point of putting a 93-year-old on youth court. Also, why now? Why when he’s 93? Before 2011, it was very hard to convict Nazi concentration camp workers of murder because German officials needed to have specific evidence that linked the concentration camp guards to one or more individuals. But that changed when former Nazi guard John Demjanjuk was convicted just because he had worked at a concentration camp. That’s the reason they are trying Dey now – because they couldn’t have before recently. Reading all this made me understand why they put Dey on trial now but a part of me still didn’t get what the point of trying to put a 93 year-old man in jail who will probably die soon anyways. Then for some reason, I thought about the Johnny Cash song, and the lyrics rung through my head.

“You can run on for a long time, but sooner or later God’s gonna cut you down,”

Dey committed a crime. He was an accessory to 5,230 murders. He deserves to be in jail. Dey faces up to 10 years in jail if committed, which at his advanced age would be a life sentence. So Dey most likely will die in jail, if convicted. There’s a chance that he may die even before the trial is over. But he has to pay for what he did no matter how old he is.

Dey says he is sorry for his actions and says he never wanted to be a guard at Stutthof, that he had a heart condition and therefore couldn’t have joined a standard military unit. He also says that he couldn’t have stopped the murders. However, with saying that he also admits that he never tried to stop them, and he still showed up to the camp every day. He also knew those were innocent people being killed. Dey could have tried to do something, but instead he just stood by. He heard the screams; he saw the blood. Yet he did nothing, and that is a crime. Dey may be 93 years old, but there needs to be some kind of justice. Dey ran on for a long time, a very long time. But God cut him down.