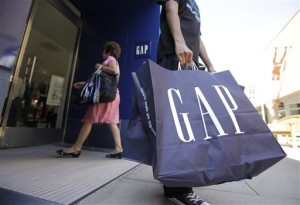 Anyone who knows me well can attest that I am extremely cheap. I am frugal. I am a penny pincher. Hey, what can I say? I am a financially struggling college student, and I try to stretch the little bit of money I make at a restaurant on the weekends as far as I possibly can.

Don’t get me wrong, I’m not complaining about my minimum wage paychecks; I acknowledge every day how blessed I am to have a job and the opportunity to attend school, but it would be nice to make a little more than $7.25 an hour, especially on those busy Friday nights.

There has been a large amount of talk surrounding the idea of raising the national minimum wage to $10.10 an hour according to the Congressional Budget Office. This would be extremely beneficial to those financially unstable college students like myself, as well as those who rely on a minimum wage income to support themselves.

According to Steven Greenhouse’s New York Times article “Gap to Raise Minimum Hourly Wage,” Gap will set its minimum wage to $9 starting in April of this year and establish it permanently at $10 beginning in 2015. This decision by company officials will raise pay for 65,000 out of the 90,000 total Gap employees.

Stuart Appelbaum, president of the Retail, Wholesale and Department Store Union, was quoted in NYT stating that limited praise for Gap’s wage increases. “I think that what they’re doing is a step in the right direction,” he said. “It’s good for their business, it promotes employee loyalty and it will reduce employee turnover, but it’s not enough. The biggest issue facing retail workers nowadays is being able to work enough hours to earn a decent living.”

Appelbaum makes a valid point here. I work hard in school with the hope that when I graduate, I can use my degree to obtain a job where making minimum wage and working paycheck to paycheck will not be a concern. This increase will not only benefit the employees individually, but also the company as a whole, especially from a public relations standpoint. There are many talented individuals who work in retail, and by offering this increase Gap will be able to entice these higher skilled individuals away from their competitors.

The minimum wage controversy is one of the hottest topics in Washington D.C. right now, but according to Greenhouse’s New York Times article, Gap’s chief executive said that his verdict is not a political decision. It is however a ruling to invest in frontline employees that directly support the business. Glen Murphy believes that the decision “will deliver a return many times over.” Gap’s company promise to its employees is to do more than just sell clothes, and Murphy believes that this wage increase directly implicates the company’s mission statement. Gap not only wants to financially profit, but they want their employees to enjoy coming to work and be proud to represent the brand name Gap.

It was unmentioned how the wage increase will affect other employees such as store managers. There was also no comment from executives as to where the extra funds will be extracted from to support the wage increase.

I believe this wage increase is a step in the right direction for American economics. CEO Glen Murphy acknowledges the vital importance of his employees and rewards their hard work by raising the minimum wage. It is my hope that other retailers follow Gap’s lead, because I know there are many people out there who rely on a minimum wage job for their only source of income. From the cashiers, to those folding the clothes, each member of a retail store is equally important to the success of the business and should be paid a livable wage for their efforts.

AP – FILE – In this Aug. 9, 2009, file photo, a shopper leaves a Gap store in Palo Alto, Calif. The nations largest clothing chain, which operates, Gap, Old Navy, Banana Republic and Athleta, said it would raise the wages to $10 by 2015. (AP Photo/Paul Sakuma, File)

By Duke Staff Four years after this young man was wrongfully arrested and beaten by three Pittsburgh police officers, justice has finally been served in the judicial system. The question remains, however, for Jordan Miles, […]

10/18/2018 By Ollie Gratzinger | Opinions Editor Over the summer, childrens’ retail giant Toys R Us announced that it would be permanently closing the doors of about 735 U.S. locations as a result of bankruptcy […]

By Rebekah Devorak | Student Columnist There are three types of people on Thanksgiving. First is the increasingly rare person who savors every last bite of turkey and lingers for hours around the table in […]