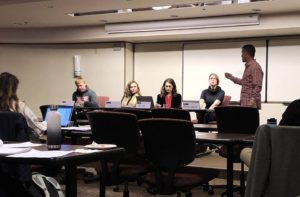 An event co-sponsored by the Center for Teaching Excellence and the Women’s and Gender Studies department at Duquesne University on Feb. 13, brought people from different walks of life at Duquesne to reflect on what it means to be an ally for the LGBTQ+ community from a teaching perspective.

A student panel focusing on the topic, “Gender and Sexuality in the Classroom: Serving Students as Allies,” brought awareness of how LGBTQ+ members are treated in the school system.

Erin Rentschler, from the Center for Teaching Excellence, opened the event by allowing the audience to reflect on what it means to be an ally in the classroom. The audience then came up with a working definition: An ally is someone who is able to speak out and stand up for a person or group that is discriminated against.

The discussion was then moved over to the student panelists.

“It’s really not an issue from peers and classmates only, it comes the whole way from the top with administration,” said junior education major, Ryan Pontzloff, referring to how the issues stem from the adults these children look up to.

According to the Center for Teaching Excellence, the goal for becoming an ally is to draw on the idea that students in the K through 12 school system must be taught how to respect everyone in their community by following the actions administrators.

Pontzloff, the first of four student panelists, spoke on the issue that administrators are not including the LGBTQ+ community in the school system. This makes students feel unwelcome and uncomfortable not only around their peers, but also their teachers and administrators.

“Clearly you’re here because you care. Myself and other individuals in the LGBTQ+ community need you to care louder,” Shirey said. She, among other students there, are pushing for acceptance across the Duquesne community

Jess Jack, English Ph.D. student, and Monica Lawson, clinical psychology Ph.D. student, concluded the panel with topics on how to make a college classroom more accepting and welcoming to all students.

Jack, referring to personal experiences, drew on the importance of inclusion in the syllabus. She believes rather than handling matters as they appear, like the incorrect use of pronouns, including them in the syllabus from day one of the course allows for a more welcoming setting in the classroom.

“Most instructors aren’t taught how to handle those moments,” said Jack, referring to when a teacher may misgender a student by using the wrong pronoun. “All too often, this fear of discomfort leads to silence.”

Jack then explained that because most teachers are afraid of mis-pronouning someone, they often don’t say anything at all.

Lawson discussed the importance of understanding what pronouns students prefer to use. Another idea she incorporates into her teaching methods is to include diversified examples of readings and authors throughout the course. Christopher Meidl, of the education department, took time to respond to the panelists and ask questions to the audience to further reflect on the issues at hand.

“Some ideas that I incorporate into my classroom are passing out notecards on the first day of school and asking the students to write down their name, major and hobbies, but also their pronouns. Rather than reading them out loud, I collect them individually. This way my students don’t have to announce it to the class,” said Lawson, who also teaches a psychology class at Duquesne.

The event concluded with a question from the audience, “What should Duquesne do to care louder?”

Panelists responded with the demand to stop censoring LGBTQ+ language. Acceptance in everyday classroom teaching and from administrators is key in welcoming these ideas into the Duquesne community.

“Asking why is an event like this so surprising? Being able to say ‘this isn’t that big of a deal, it’s just exciting’ and being loud about being present is super important to bring these ideas to the community,” said Shirey.

Although the panelists recall situations where Duquesne supports the LGBTQ+ community, according to Pontzloff, “there is a way that it seems like Duquesne is closeted [in] their support for you, but they won’t shout for you.”

This event, along with other events held by the Women’s and Gender Studies department, like the Gender Neutral Fashion Show, aims to change Duquesne into a more welcoming and accepting community. Rather than simply speaking on these issues, students come together to make a difference.

“We are not our thoughts, we are our actions and our words,” Jack said.