By: Jen Cardone | For The Duquesne Duke 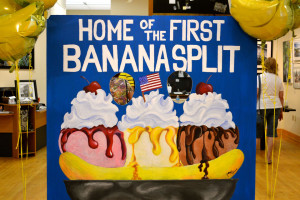 Yellow balloons and bananas lined the streets of downtown Latrobe this past weekend in celebration of its first banana split festival.

The Latrobe Art Center in conjunction with Saint Vincent College and the Latrobe Community Revitalization Program all hosted a three-day festival in celebration of this banana delight.

David Strickler, 23, designed the dessert in 1904. He was an apprentice at Tassel’s Pharmacy. On Friday, a Pennsylvania state historical marker was placed outside the pharmacy, according to Maria Graziano.

Prior to the festivities in downtown Latrobe, there was a competition on the Latrobe Art Center’s website to vote for a banana split theme song. Voting ended August 17th. On Tuesday, there was a banana split preview concert where the winner was announced.

An entire recreation of Strickler’s Drug Store was on display in the front window of the Latrobe Art Center. From Strickler’s bar to the original dishware, one could have a sense of what the drugstore looked like during the banana split’s invention.

Events on Friday included a Dole Banana Daiquiri Hour and a Yellow Tie Gala where women wore yellow and men, a yellow tie, according to Graziano. The gala consisted of hors d’oeuvres, drinks, and a create-your-own banana split bar. All profit went to the Latrobe Community Revitalization Program.

Saturday included a street fair, but the main event was a 1950s soc hop, where everyone was encouraged to blow the dust off of their 50s attire for an evening of fun-filled dancing. Waitresses were on roller skates to serve the people root beer floats, fries and sliders. Guests also enjoyed a create-your-own banana split bar this evening, Graziano said.

On Sunday, Dole encouraged the freshmen of Saint Vincent College to peel bananas in hope of creating a video that would go viral and promote their company,” Graziano said. 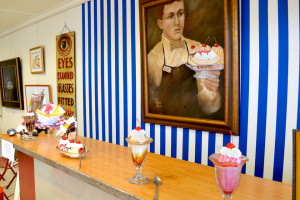 Katie Miller, 28, a journalist whose family owns the Latrobe Dairy Queen. Miller’s family won the online jingle competition and performed “Studious One” Tuesday evening to represent the banana split at the festival. They sold Dairy Queen t-shirts with a banana split on the back and made banana split blizzards. Additionally, all of their profit went to the Hope Center and the Latrobe Art Center.

“My favorite part of the entire festival is the sense of community — it has brought a lot of businesses and charitable organizations together,” Miller said. She appreciated how people like Congressman Tim Murphy and Arnold Palmer represented the community at the dedication ceremony Friday.

Donna Shearer is a retired Siemens Westinghouse employee who really enjoyed the festival. She was wearing yellow and a hat decorated with flowers and bananas that her significant other made for her just for this event. At 16, she worked at a Frosty Freeze, so she has always enjoyed banana splits and was excited about the festival.

Some people, like Dennis Blank,who is retired, decided to attend the festival for the car show because “it’s what we do for a hobby; it’s part of our routine.”

There was something for everyone at the festival this weekend, and hopefully enough to see it come back next August. 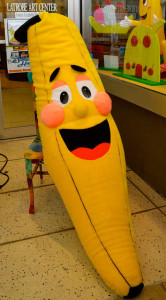