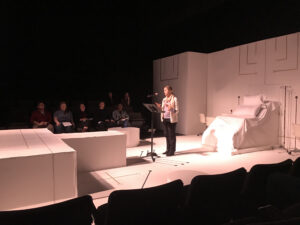 Sexual violence occurs on college campuses across the nation, and Duquesne University is no exception.

Students Against Sexual Violence (SASV) hosted an event entitled It Happens Here on Nov. 18, at the Genesius Theater. The primary goal of the event was to inform students that sexual assault and rape are a reality on Duquesne campus, as well as to educate on all the options available to students.

“[It’s] not just a Pittsburgh or college issue, but a Duquesne university issue,” SASV member Olivia Scherer said in the opening statements.

The members of SASV sought to be as raw and brutally honest as possible with the It Happens Here event. The event recounted three stories of Duquesne students who experienced sexual violence on campus, as performed by actors. Only one of the three stories were ever reported to the university.

The names of the actual survivors were not disclosed to the audience. Actors Liviu Reynolds, Erin Lexner and Mikayla Gilmer performed readings of the survivor accounts of living after experiencing rape.

“Simply knowing he’s here puts me on edge,” said Reynolds, in character as an anonymous survivor.

The stories, while being uniquely different situations, all tread similar ground: the immense sense of discomfort and danger the students would feel seeing their perpetrator on campus.

“Now I have to see him on campus all of the time and I have to live with it,” said Lexner in character. “I hate that I see him around.”

Through the survivor recounts, it was evident that these memories still haunt them and have placed a significant impact on their life.

“Still hurts me to look back on this moment,” said Gilmer’s character.

Between each of the actors reciting the accounts of survivors, SASV additionally hosted Ryan Sabokik, a prevention educator from Pittsburgh Action Against Rape (PAAR) and Lee Robbins, the Title IX coordinator for the university.

Sabokik spoke to how PAAR seeks to highlight the voices of people who experienced sexual violence and provide the most help and assistance in every way it can.

Sabokik told the audience about PAAR’s legal advocacy programs. PAAR will walk sexual violence victims through the legal process so they can make an informed decision on whether or not they wish to report to the authorities.

Sabokik believes that a lot needs to be done to educate the public to prevent the continuation of rape culture.

Robbins outlined the vast extent of what Title IX is able to do for students, such as changing classes and living situations, and confidential services to keep students’ identities private throughout the reporting process.

“As Title IX coordinator, I want you to be aware that there are many people at the university and resources that are here to support you and those around you if situations like this arise,” said Robbins.

“We wanted to do something like this because it’s easy for survivors to feel stigmatized or silenced by how difficult the reporting process can be,” Llewellyn said.

She continued to drive home the point that sexual violence isn’t something isolated outside of the university but is something to always be aware of.

“So we wanted to raise awareness to the fact that it happens here, which is where the title comes from,” Llewellyn said, “that it isn’t just like this vague college issue that we hear stats about, but it’s something that happens right here in our own dorm rooms and our own campus.”