It’s a bright and blue-skied August afternoon on one of the last weekends of the summer boating season. As Ben Calik wades in the water of the Monongahela, a smile comes across his face as a certain singer comes on the boat’s stereo.

“Ben loves to surf to the songs of Prince,” Steve Ford jokes.

Just another day on the job for friends and colleagues of Surf Pittsburgh, a company established to teach thrill seekers how to catch a wave on the Ohio, Monongahela and Allegheny rivers.

Ford, 35, owner of Decade in South Side, plays captain on the boat. As he takes Calik, the instructor for Surf Pittsburgh, up for another run, he quickly falls off the board.

“Felt like your speed jumped up there,” Calik said.

“You started too soon,” Ford answers.

Surf Pittsburgh got its start last summer, when Ford bought the 23-foot Centurion Enzo, a boat deisgned specifically for surfing. Ford, Calik and their friend Doug Pritts, the final member that makes up the Surf trio, surfed through the winter and wanted to share their experience.

“We didn’t start anything. We just wanted to share our interest of surfing,” Ford said. “Anyone can go out and surf. It’s not that challenging. [I wanted to] share that and get people out there to surf.”

So after braving the wintry elements (Surf Pittsburgh operates year round), they started sending trips out in mid-May, and Brandon Young was part of one of the first trips.

Young owns and operates DeadBuryDead, an online clothing store and wanted to reward his five-man staff with a surfing trip after they met their sales goal for June.

“I thought it was a pretty unique thing to do. Most of my staff had never surfed before,” Young said. “I didn’t think you could do something like that in Pittsburgh.”

Young’s design assistant, Jordan Armstrong, was terrified of the water and had never swam before, unknown to Young.
“I said ‘Jordan are you gonna go swimming? And he was just like ‘no.’”

Eventually, the crew got him in the water. 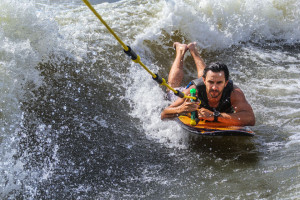 “We put him on a surf board and he popped right up,” said Ford, who carries DeadBuryDead’s shirts in his store.

Surf Pittsburgh can accommodate two to 10 people at a time plus the captain and instructor. Rates start at $125/hour for two and $25 per person until capacity.
Trips will leave whenever the customer is available.

Surf trips leave from the 18th Street dock on the South Side. Monday through Friday, the crew will motor over towards Downtown. On the weekends, they will stay far away due to the increased traffic, Ford said, and will stick around the South Side on the Monongahela.

In an hour lesson, 20-25 minutes of instruction is usually needed for a person to “get the hang of it,” Calik said, who learned to surf behind Ford’s boat. After that, a little tweaking and some pointers are given.

“By the end of the lesson, [customers are able to] let go of the rope and ride the wave without any assistance,” Calik said.

Calik, who is also a ski team coach at 7-Springs, doesn’t mind sitting a few waves out to let others try.

“I enjoy it so when I see that they enjoy it and get that ‘epiphany moment’ …To see that is rewarding. That’s what I like about teaching,” Calik said.

Decade has also become the headquarters for Surf Pittsburgh, where Ford is now “getting calls everday” about the surf company.

“Making [Surf Pittsburgh] connect with Decade, as well as it being a hobby and pleasure kind of makes sense,” Ford said. “Decade is now becoming Decade Surf and Clothing Shop.” 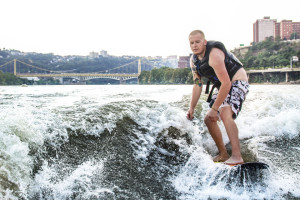 Surf Pittsburgh shirts, tank tops and hats can now be found in the store, with new designs and shirt coming later on. Surf Pittsburgh looks to be “more visible” next season with flags and even giving their boat a new look, according to Ford.

Ford opened Decade in 2006 after moving back to Pittsburgh from Long Beach, Calif., where he moved to “learn to surf and find a job.” He ended up in the fashion industry, as a wholesaler for clothing company Worn Free and opening Decade was the next move after that. Originally from Upper Saint Clair, Ford attended West Virginia University (’00, Parks and Rec).

When the summer season ends, most will pack up for the winter.

“We’ll be surfing in front of the stadiums once summer season is over and that’s awesome. We were out last year during Steeler games, wearing our jerseys,” Ford said. “Everyone in their right minds pulls their boats up and put it into storage [after summer]. We just keep going.”

By Rebekah Devorak | Opinions Editor  For anyone who is tired of wading through vape smoke at concerts and sports game, you can add a tally to the win column. On March 7, the Allegheny […]

By Duke Staff Last Friday, the EPA announced that automaker behemoth Volkswagen has been deliberately, and illegally, cheating its way through the emissions tests of VW and Audi cars equipped with the company’s 2-liter diesel […]