“We spared no expense!” 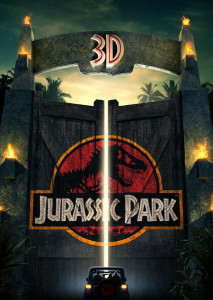 This line of dialogue, uttered by Richard Attenborough numerous times in Jurassic Park, reflects the quality of 3D re-release that entered cinemas this past weekend; namely, a lot of care, time and effort went into preparing and converting the blockbuster film for another round in the theater circuit.

As a result of this fine craftsmanship, I strongly recommend catching the film before it leaves cinemas. Now, I can almost hear the connected questions: why should I pay to see a film I have already seen, especially one that was converted to 3D?

There are three main selling features of this release: the 3D, the video and sound qualities. The first component of the film that audiences notice is the 3D. Unlike other 3D releases, the film does not descend to the cheap gimmicks that have become associated with the format: objects do not fly off the screen, for instance. Instead, the environments and subjects were supplied with the sufficient detail to sell the illusion of realism.

Viewers will be astonished to see the level of detail on the skin of the sick triceratops: it makes the work the special effects team did on the animatronic even more remarkable. Now, in terms of the backgrounds and sets, the quality is the same: viewers will feel like they are knee deep in the foliage with the hunter-turned-prey game warden (the late Bob Peck.)

This successful conversion of the film required the quality of the video element itself to be in the highest grade. The upgraded film causes the viewer to notice elements they had not seen before. For instance, the irony behind Dennis Nedry (Wayne Knight)’s demise is amplified, when it is shown that he was tauntingly close to the dock: a sign in the background that what was barely noticeable in the home media releases (or so I thought) stood out.

One of the moments that I thought reflected this well was one without dinosaurs: the shot of Ellie Sattler (Laura Dern) descending the stairwell feeding into the underground power plant. The improved video quality highlights a brief aesthetic shift: Sattler is descending into what can be described as an industrial sepulcher: narrow and dark pipes and walls surround her. For a while, her body is choked in shadow, leaving only the pink outline of her shirt visible. Thus, for the four or five seconds it takes for her to descend the stairs, the scene looks as if it had been pulled from one of David Lynch’s earlier films. While this is a small detail, it’s that really stands out.

Of course, it would be a complete upgrade if the sound was not enhanced, as well. What I noticed was an improvement in the ratio between the music and sound effects. It is hard to pinpoint a particular scene, but I heard a lot more of John Williams’ score than I did in the home releases; and it makes the music stand out. Whatever the team did seemed to solve one of the recurring problems in cinema and Blu-Ray releases which was finding the perfect ratio where the sound, dialogue and music are at the right amounts, and not diminishing one another.

8/27/20 Griffin Sendek multimedia editor As the production of Jurassic World: Dominion continues just outside of London, Universal Pictures seeks to prove that even during a global pandemic, Hollywood blockbusters are far from extinction. Despite […]