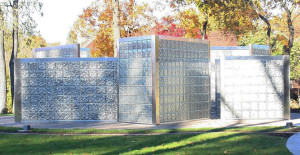 By: Katie Auwaerter | The Duquesne Duke

That’s approximately the number of Jews that died during the Holocaust between 1933 and 1945, according to historians.

Middle school social studies teacher Bill Walter wanted give this statistic a visual aid to help his students at Community Day School, a Jewish K-8 school in Squirrel Hill, truly comprehend this staggering number. After toying with a few ideas, he decided to do something simple: collect one soda tab for each Jewish life that was lost during the Holocaust.

What started in 1996 as a “simple” visual aid transformed into the Gary and Nancy Tuckfelt Keeping Tabs Holocaust Sculpture at the school, located 6424 Forward Ave. The opening ceremony was Sunday.

Top donors Gary and Nancy Tuckfelt have been involved in the project since its collection phase when their daughter, Cara, was a part of Walter’s class. Their family was deeply moved by an educational study tour of Holocaust sites in Europe.

“It was important to us to generate the conversation and give a voice to the people that those pop tabs represent,” Nancy Tuckfelt said.

The sculpture is in the formation of a disjointed Star of David and is comprised of 960 glass blocks that are each filled will 6,250 soda tabs. 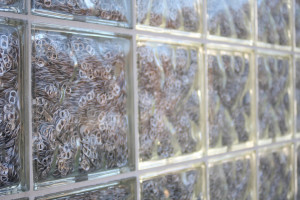 Walter talked about the many hours that went into counting the soda tabs.

“Sometimes I’d look at one… and I’d realize,” he said as he held up a soda tab for the crowd to see, “that this was someone at one time. It represented someone. A life that was cut short and didn’t get to do the things that I did.”

When the collection of the soda tabs was completed in 2000, the next step was to design the sculpture. In 2001, the school commissioned artist-in-residence Elena Hiatt Houlihan to work with the middle school students to design a sculpture that would incorporate and preserve their collection.

“What good does art do if it does not communicate meaning? If it does not touch the heart of the viewer? If it doesn’t move you?” Houlihan said. “That was the challenge for me and the students – how to take these ordinary pop tabs and imbue them with meaning that would speak to future generations.”

The list of donors, sponsors, and contributors spanned multiple pages of the ceremony’s program book.

“What inspired all these people [to donate]? Not only the very important and somber need to remember the 6 million, but also the very unique opportunity to have their memory serve as a cautionary note; a reminder of what can happen if we do not keeps tabs on our humanity if we are not alert to signals of hate, racism, prejudice, persecution, and tyranny,” said Avi Baran Munro, head of Community Day School. “Sadly, the battle for our better selves still rages. Each one of us that remembers the lessons of the past must become an activist for a better future.”

The past hit close to home for some of the attendees, who were survivors of the Holocaust. This included 76 year-old Judith Heiser Stein, who escaped with her parents, Cantor Mordecai and Elly Heiser, at age 3. The Squirrel Hill resident helped collect the tabs with her grandchildren, who are Community Day School alumni.

The majority of Stein’s extended family died during the war.

“Six million – you don’t know how many that is until you see all of this. The sculpture is a good thing because people are denying it and they’re not remembering. At least the people here will remember so many that died,” she said.

The sculpture is complete, but the community education continues. The eighth grade students will be trained by The Holocaust Center of Pittsburgh as docents to assist with tours when visitors come to see the Keeping Tabs sculpture, according to Tim Richart, assistant director of Institutional Advancement at the school.

The simple visual aid not only serves as a way to remember one of the world’s most devastating genocides, but it also serves as a beacon of hope; those who visit the sculpture are also seeing the strength of the Community Day School and the Squirrel Hill community that will continue working together to spread a message of peace to the Pittsburgh area.

“With this sculpture, these tabs are a part of a different and greater symbol to me now … my hope is that this will be a way to help bring about a different world where those kind of injustices no longer exist,” Walter said.