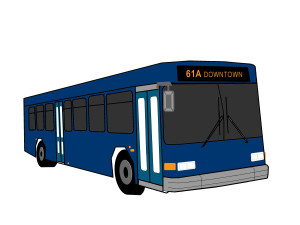 I come from a small city in central Pennsylvania where it’s difficult to get around unless you have a car. When I first started school at Duquesne, even having the ability to walk from campus to South Side or to take a bus to Squirrel Hill, it was like Pittsburgh was my oyster.  It felt as if I was an actual adult in an actual city. I was an independent woman. I began to discover neighborhoods and memorize bus schedules. I eventually started to call Pittsburgh “home.”

Over-time, other students and friends started bringing their cars from home to school.  It’s not rare to find students who are in their senior year and are only familiar with South Side, Downtown and Oakland.

So as a request to students planning on bringing their cars to school next year, leave that extra baggage at home.  Besides its exorbitant price tag of either $715 for garage parking of $708 for surface parking per academic year, money isn’t the only thing you will be missing if you make this decision.  You really miss out at a chance to truly know where you live.

In Jeff Speck’s Walkable City: How Downtown Can Save America One Step at a Time, he explains how ditching his car upon moving to Washington D.C. was the best decision he had made, stating “I had gained thousands of dollars in transportation savings and also developed a deeper understanding of my city by experiencing it at a walking and biking pace.”

What Speck says is far from false.  Experiencing Pittsburgh from walking or biking speed can open your eyes to the details that make each street and neighborhood special.  When driving down a street like East Carson or Murray Avenue one does not have the quickness to notice every pizza shop or hair salon along the way. While walking, biking or even sitting on a bus, it is easier to pick up on side streets, interesting graffiti, or the cute, little old man who will converse with anyone offering to listen.

Let’s not forget the money-saving benefits, either.  No need to bother with parking tickets and parking meters. And those expensive gas prices? Not your problem anymore.

Located nearly in the center of the city, I believe Duquesne should encourage its own students to get acquainted with Pittsburgh. An idea that may be considered wishful thinking would be University-issued bus passes. University of Pittsburgh, Carnegie Mellon University, and Chatham students all can use their student IDs to use the bus, all of which have been updated with Port Authority’s ConnectCard tap-and-go capabilities. Just having the access is encouragement enough for students.

Other ideas to consider would be to increase the cost of parking permits available to students or offer shuttles or loop bus service to neighborhoods that aren’t the most adjacent to downtown, like Shadyside, Bloomfield or Lawrenceville.  These and others have their own attractions and quirks that it would be a shame to have missed out.  Reducing the number of parking permits would seem the most obvious way to reduce the number of students bringing their cars to school. However it is important to note that there are commuters who live out of the way of public transportation, let alone walking.  If the price of the permits were increased, it would have students giving more consideration as to whether having a car is really worth the price.

The best part about not depending on a car while attending Duquesne is how much of a native you become in the process.  Nothing feels more satisfactory than explaining to someone which bus to get on.

Taylor Stessney is a senior sociology major and can be reached at stessneyt@duq.edu

Ariana Grande “positions” herself for another album hit

November 12, 2020 The Duquesne Duke Arts & Entertainment Comments Off on Ariana Grande “positions” herself for another album hit

Hope is not lost for Dukes after disappointing loss to Pitt

December 5, 2015 The Duquesne Duke Men's Basketball, Sports Comments Off on Hope is not lost for Dukes after disappointing loss to Pitt

By Andrew Holman | The Duquesne Duke The Dukes rolled to a 6-1 start to begin the season and it seemed everyone was drinking the Duquesne basketball Kool-Aid. The hype around the City Game was […]