Whenever I list the flaws of a film, I try to follow them with suggestions on how to correct them, or, in some cases, improve them. 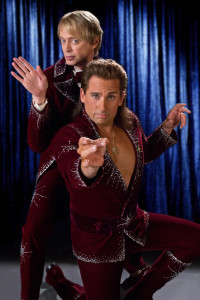 Every year there’s a film whose detractors are almost impossible to resolve. This difficulty in resolving the problem does not mean the film is atrocious (like A Good Day to Die Hard) but, that I do not know where to begin.

The latest comedic offering from New Line Cinema focuses on the rise, fall and return of two magicians in Las Vegas. The film has a fine cast, soundtrack and array of locations in Las Vegas (I love seeing Vegas on the silver screen). The film’s major flaw is that it is inconsistent with its comedy and tone. In terms of performance, the three principle actors – Steve Carell, Steve Buscemi and Jim Carrey – excel.

Carrey’s character is the Houdini of pain: instead of escaping from a locked trunk, he endures pain through spectacles such as sleeping on a bed of hot coals. His performance recalls the hyperactivity and physical comedy from his earlier films, such as Ace Ventura. Steve Carell, on the other hand, opts for a dry and socially awkward comedy, while Steve Buscemi breathes new life into his recurring cinematic image as the eccentric weirdo.

The comedy derived from these three actors was music; the problem rests in the narrative. Burt Wonderstone taps into the comedy popularized by each of the actors, in addition to throwing in elements of the buddy comedy (as manifested in Step Brothers), Austin Powers over-the-top sexual humor and Jackass grotesque. As if this was not problematic enough, the film weaves in and out of drama and comedy, and not fulfilling either of the halves. What is left is a film that is inconsistent with its comedy, tone and narrative. There are some good ideas nestled in the film: the replacement of traditional Vegas hotel entertainers with talentless acts; the effects of disillusionment with entertainment; and, the difficulty of reaching the American Dream.

These problems are contrasted with moments of brilliance from the script: the scene when Carell’s character meets his idol (Alan Arkin) is amusing and touching; the idea of a comedians-only bar was clever and handled well; and the scenes criticizing/exploiting celebrity culture, Carell and Buscemi’s backstage bickering fit well. Again, the inconsistency robs these moments and performances of power. Thus, the question that emerges is, how could this problem be resolved?

One scenario is reformatting the film into a miniseries. The benefit of this would allow the plot lines to be fleshed out and not have to face the concern of runtime. In addition, each episode could focus on a brand of comedy or meet a ratio of it, like the coverage of characters in Game of Thrones. Another option would be lock onto one form of comedy and stick with it (such as Mel Brooks’ brand of meta.) Granted these options are extreme but they are the only ones I can think of until a few questions are answered.
The questions that would influence the criticism would be: was the script complete before shooting? How much of the film was improvised? And what was left on the editing room floor? Until we have an adequate understanding of what went on behind the scenes, it is exceptionally difficult to suggest what could have been done. Burt Wonderstone has a lot of imperfections but also some moments of brilliance.