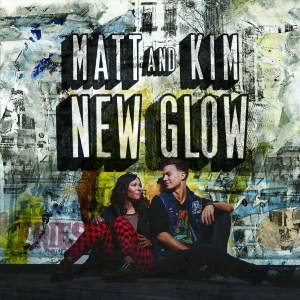 Notoriously known for upbeat, feel-good music, Matt and Kim’s newest album New Glow, released Tuesday, doesn’t stray from the duo’s roots, but what is upbeat and feel-good doesn’t always stick in the minds of those who listen.

The Brooklyn duo is comprised of Matt Johnson, who plays keyboard and provides vocals, and Kim Schifino, who plays drums. Their music has traditionally featured a lo-fi, self-produced sound, depending on implementing keyboards to add more layers to their discography.
A quick 27-minute listen, New Glow provides the quick jump in your step you need to get your day going. New Glow will be the side to your coffee every morning, waking the listener up and exciting them for what’s going to happen.

However, at a certain point, the peppiness and upbeat nature of the songs begin to run together, which can be both negative and positive. Even songs with negative connotations such as “World Is Ending” get treated with upbeat undertones overtop of lyrics about the problems with the world and our society. Using the upbeat bounce and hook, Matt and Kim depict a downbeat universe and sing about escaping the world we live in now and running away together in a catchy and enjoyable way.

The stand out track is solely a song to remember based on a catchy hook, not on lyrics as “Hoodie On” shines as a two minute track on simply wearing a hoodie. “I don’t dress up much, just a hoodie on / Feel like a king with a hoodie on,” Matt sings. Reminiscent of the catchiness of “Pizza Party” from Ezra Koenig’s L’Homme Run, “Hoodie On” doesn’t provide much in the way of substance, but gets stuck in your head quickly. Sooner than you realize, you’ll be putting on a hoodie with Matt and Kim unconsciously playing in the back of your head.

That said, so much of New Glow just runs together. The lyrics from the majority of songs aren’t memorable, so if you find yourself humming a tune from the album, the lyrics won’t come to you. You’ll be stuck in an in-between of knowing a upbeat tune and knowing the words to the song, as it becomes hard to differentiate between songs on the album. Any song you like will become a distant memory as there’s nothing that truly makes this album stand out.

Needless to say, so much of what Matt and Kim pull off between two musicians is admirable and fun to listen to. Any fan of music can appreciate the sound that these two produce is well-crafted and well thought out with each song. Even with heavier material, the juxtaposition provided by their signature upbeat tune seemingly works.

As expected, this album provides the listener with a quick burst of positivity. The duo’s first release in two and a half years will certainly propel them back up to selling out smaller venues before a festival run in Canada at the Pemberton Music Festival. But gone are the days of Bonnaroo and Firefly Matt and Kim, as small show Matt and Kim begin to take over. If you want to see them, you’ll have to travel to Columbus on April 16 at the LC Pavilion.

This album will serve its place for a while, as you’ll listen to it while showering in the morning or on a quick jog. You’ll quickly lose interest in the album because of its forgetfulness. So when the next new Spotify workout playlist comes out, you’ll switch right back over to it, humming “Hoodie On” as you go.