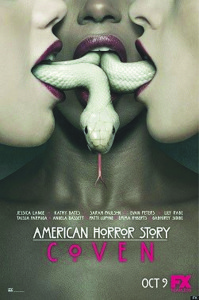 This season of American Horror Story was entitled Coven and took place in the city of gumbo, voodoo and Bourbon Street.

American Horror Story is an innovative television series that delves into concepts and different sub genres of horror. The difference between this series amongst others is that each season is a new story line with new characters. Along with this, these characters are portrayed by the same actors every season. Although this season was packed in terms of themes like witch craft, zombies, suspense and an undead love triangle, I found it to be lacking in certain aspect compared to the past two seasons.

If this season truly lacked anything, it was pure horror. The past seasons were frightening and always left me at the edge of my chair. Season one, Murder House contained themes of murder, ghosts and irritating dark teen romance. Creator Ryan Murphy really stepped it up in season two, Asylum, when he introduced themes of insanity, the devil, doubt in religion and a serial killer who wears the skin of his female victims.

But this season lacked fear. Sure, it was funny to see Emma Roberts play a stone cold witch alongside Jessica Lange. However, the show’s title is American Horror Story. The concepts in the show are horrifying, such as three resentful zombie daughters coming to eat you for supper, but the execution was lacking.

According to Entertainment Weekly the show was still going to be scary, but also comedic.

“I heard a lot last year, ‘Oh we love it, but it’s hard to sit through.’ So I wanted this year to be not so hard to sit through,” Murphy said. Although the season was more comedic, it was missing it’s horrifying nature that the fans fell in love with originally.

Another factor missing from this season was true suspense. Last season had us guessing constantly what was happening.

Who was the serial killer, Bloody Face? Who are these aliens and why did they abduct Kit’s (Evan Peters) wife Alma (Britne Oldford). Is Dr. Arden (James Cromwell) a Nazi criminal?
This season’s only big question was “Who is the next Supreme?” The Supreme within the coven is the almighty witch that controls the coven.  This season’s Supreme Witch is AHS alum, Jessica Lange as Fiona Goode.

With her reign ending as she grew older, she tried to buy time and attempted to find and kill the next Supreme. Throughout the season, fans were guessing who the next one was, and by the end, almost every single witch in the coven thought she was the next Supreme.

Although this big question kept my viewership, it did not seem as riveting as previous seasons with all the mysteries lingering around the halls of Briarcliff Asylum or the Murder House.

Another issue within this season was the amount of petty teen drama that surrounded the coven. Since this season is quite possibly the show’s peak in viewership as Coven’s finale brought in 4.2 million viewers, making it the most viewed finale in AHS history; they are probably bringing extra drama to the table.

However, the past two seasons did not include much petty drama but focused on real issues of horror such as demonic pregnancy and possession. Emma Roberts, as telekinetic starlet Madison Montgomery, was quite hysterical with her cold and sharp wit, but she was always starting drama with everyone. She was a great addition to the cast with her one liners and her antagonist traits, however, her antics seemed to blur the season’s focus, which should have been supernatural horror.

Although this season wasn’t the best, it brought about some really excellent themes of family, race, and witchcraft. In the end, almost everyone got what they deserved (except Misty). The show might have been missing a few factors, but it was still a success. It was still an incredible third year for American Horror Story.