Michael “Mook” Monack, 30 of South Side has tagged bridges, trolley cars and even government vehicles in his time as a graffiti artist. After being caught in 2001, he spent a total of four months in jail, two years on house arrest and had to do 200 hours of community service and pay a restitution of $7,000. Thirteen years later he is not afraid to tell his story and one question prompted several responses. Mook opened the newest tattoo shop in South Side, 10th Street Tattoo, and has a 9-month old son, Rocko.

Q: How did the whole Mook thing start?
A: I started it doing graffiti as a kid. The way I gage it is when the first Wu-Tang tape came out. You know it was like 1992, 93, doing little tags on my notebooks at schools. But I never had a tag name back then…. Really as it progressed and as you get into graffiti it sucks you in … Once that happens, you go out with stickers, you put your tag on a sticker first and put that up and after you do that you walk around with markers and start doing your tag with markers. And after that you start using spray paint, then you start using multiple cans of spray paint. Then you do two colors and then four colors and then 50 colors. After that, you pretty much become secure as a graffiti writer. Then you’re like, ‘Alright I’m gonna go out and show everyone what the hell I can do.’…The thing for me was I just liked the experience, the whole thing. The technique for me was writing your name in a tag or the technique it took to get to a spot, you know what I mean? And not necessarily the wow factor of the art aspect of it, but the art of getting to the place to do your art.

[on tagging the 10th Street Bridge]

A: That’s how I ended up tagging the 10th Street bridge. Which is like the most simple thing in the world. Like it’s not some majestic tag. It’s not some majestic piece of artwork. It took two seconds. Done and I was out. I didn’t take my time. I was in the neighborhood … I was stranded in the Strip District and had to walk back. And I was like ‘I’m climbing up here and painting this bridge so they [my friends] see it when they drive under it on their way home.’ It wasn’t even a big deal for months and months and months until they started seeing more and more pop up. It always ends up like that. You’re always in like a competition of some sort after a while. 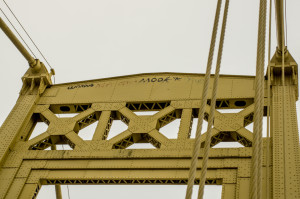 [on how graffiti has changed]

A: It’s always changing to this day. There’s always staples, tools, that people always use, like a mechanic. They’re never going to stop using a wrench. But eventually they make up a better way to do something.  Even to this day, there’s new markers that come out. There’s new brand of paint that come out. New caps. New everything. It always stays interesting, which keeps kids doing it and it keeps old dudes coming back. The old dudes are like ‘oh (expletive) you can buy one of these now. We used to have to make these.’ It’s one of those things man, it’s pretty evil. It’s fun though. Its great fun. You make a bunch of friends, and you make a bunch of enemies, either way.

Q: How many pieces have you done?
A: It’s kind of difficult to even estimate. There’s, I don’t know, a few. Enough to get on the news I guess. Enough to get people upset at the time.

Q: What is your favorite tag you did?
A: 10th Street [bridge] was fun. I was by myself. It was 12:30 at night, right next to the jail. You have police driving underneath you. A whole building of police right next to you and here I am climbing up this bridge and I went to step down on top of the beam that goes across that’s painted and there’s a pigeon sleeping there. I step on this (expletive) pigeon and he comes up, flapping out flying out. I fell backwards because it scared the (expletive) out of me and I grabbed the smaller cable with my armpit, one foot one arm at the top of the bridge trying to invade this insane pigeon is what I thought. It was funny, after that I was like ‘I have to do this and I have to survive it now because you know, a pigeon isn’t going to kill me and I’m not going to get my name up here’ pretty much. Climbing down is always the worst part because then you’re like ‘aw man what if I fall now? I won’t even get to see the finished product.’ But that was probably the funnest one.

Q: What’s the feeling like [of painting graffiti]?
A: It depends. If it’s a bridge or something, you’ll get down and be like ‘(expletive) yeah, no one’s able to top that.’ It’s kind of like an anticipation. You’re waiting for someone to be like, ‘Dude what did you do? That’s insane.’ It’s fun. It’s like you know something that no one else knows until someone sees it.

Q: What would you say to your son if you found him graffiti-ing?
A: I don’t know. That’s something I contemplate. I couldn’t be mad. That’s like an over protective parent who did a bunch of drugs in the 70’s [getting mad at their child]  …. Its’ okay to be mad, but don’t be mad at yourself and take it out on your kid. You know what I mean? If I ever caught my son graffiti-ing, I would say ‘What you did is (expletive) up’ I don’t know if I would say (expletive) up, but basically what you did is wrong and there’s consequences for it. That’s the way it goes. If you go to jail, you go to jail. If you do go to jail, don’t call me. You did this, I didn’t do this. I’ll help you, you know, if worst comes to worst and there’s no way you can afford something or you need an attorney. Yes I will help you. But when it comes to pay those fines and it comes time to do that community service buddy, don’t think I’m riding you there. You’re taking the bus.’