By: Seth Culp-Ressler | For The Duquesne Duke 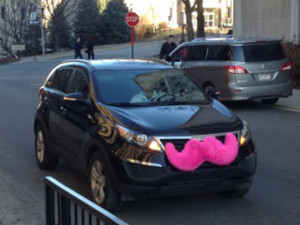 Lyft, a popular ridesharing app, recently joined the ranks of Pittsburgh transportation options, but does it live up to the hype? On Saturday afternoon, I decided to test Lyft for myself, grabbing my roommate for a trip down to the Waterfront.

The entire Lyft service revolves around their app, available for both Apple and Android smartphones. Upon downloading, you are prompted to log in, yet the only option for doing so is through Facebook. While most people will probably have an account from which to do this, it seems odd that no other options are provided.

After entering your phone number, email and credit card information the app is all set for booking a ride, which my roommate and I did at 4:20 that Saturday afternoon. Yet another flaw with the system presented itself immediately upon trying to request a driver. Apparently, in its current state, you can only book a driver when one is actually available — no list or queuing option exists. Luckily, a driver opened up almost immediately. We set the pickup location for the Duquesne Union and sent the request.

We were notified that our driver, Abe, would be there in about six minutes. Unfortunately, we had yet to even leave our room. So, quickly grabbing our things, we rushed over to the Union, hoping to arrive before Abe. As it turned out, that wasn’t going to be a problem.

Once the ride is booked you are able to track your driver’s position with the app. As we did this it became apparent that Abe did not quite know where he was going. He came close to campus a few times, only to head past in some tangential direction. Things were off to a rocky start.

Eventually my phone rang. It was Abe. He was calling to check if Duquesne was downtown. I told him yes, and he said he would be there soon. Sure enough, at 4:40, twenty minutes after we called for the ride, Abe rolled up in his black Kia Sportage. With, of course, the requisite fluffy pink mustache attached.

As is one of the staples of Lyft, I hopped into the front seat, my roommate took the back. Greeting me with a fist bump, another of Lyft’s quirks, Abe asked where we were off to, entering the destination into his in-car GPS. Then, just like that, we were off.

My first impression was that it all felt — normal. Kind of oddly so. Immediately upon leaving we struck up a conversation, and it kept going for almost the entirety of the trip. We weren’t subjected to sagging seats, the odor of vomit or any sense of separation between passengers and driver. It was, as gimmicky as Lyft makes it sound, like driving with a friend. Upon hearing this was our first Lyft he gave us chocolate.

Abe asked us about Duquesne, how we liked it and what our majors are. He told us about his day job, as well as how he got into driving for Lyft. He first heard about it through his travels to San Francisco, where Lyft is already established. When he learned the service was coming to Pittsburgh, he knew he wanted to sign up as a driver.

With Lyft’s launch two weeks ago, Abe started driving whenever he could. He did say that he refuses to drive Friday and Saturday nights, for obvious reasons. He tells us that on the Pittsburgh Lyft driver Facebook page someone posted that the previous Friday night a passenger threw-up in their car. So he’s trying to avoid that.

Oh, and the problematic absence of a queuing system? Apparently they’ve already had quite a few complaints, so a suggestion was sent to the app designers. Hopefully that comes into fruition soon.

Before we knew it the Waterfront came into view. The total after 6.8 miles and 16 minutes was $17. Not ridiculously cheap, but it’s worth noting that, according to Abe, the first two weeks of Lyft rides below $25 are free of charge. Apparently I signed up wrong, because I got no such perk.

I paid through the app, as well as rated Abe as driver. He got five stars. Overall it was an impressively nice ride, if a bit late. If you’re in need of a ride around town, and really don’t like the idea of calling a cab, try out Lyft. I’d wager you will be pleasantly surprised.

Driverless Ubers to coming to Pittsburgh in the coming weeks

August 25, 2016 The Duquesne Duke News Comments Off on Driverless Ubers to coming to Pittsburgh in the coming weeks

Raymond Arke | Staff Writer A city steeped in industrial history is becoming part of the technological revolution. Ride-sharing service Uber will debut self-driving cars in Pittsburgh by the end of August, according to financial […]

Getting around Town: How to navigate the ‘Burgh

August 20, 2014 The Duquesne Duke Features Comments Off on Getting around Town: How to navigate the ‘Burgh

By: Katie Auwaerter  |  Features Editor In order to explore all the wonders of Pittsburgh, you’re going to need transportation to get there. Unless you are one of the lucky few to have a car […]

By Kaye Burnet | The Duquesne Duke Pittsburgh’s newest transportation option is filling the streets with fuzzy pink mustaches. Lyft, a California-based ride-sharing company, opened its Pittsburgh branch on Friday with success, despite the opposition […]