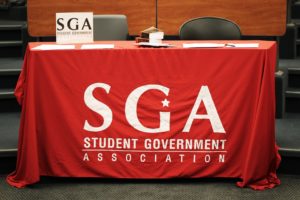 After running unopposed, junior political science and philosophy major Charlie Megginson has won the SGA Presidential election which was held on Feb. 20 on CampusLink. He will succeed current SGA President Eric Chatterjee as part of the 48th Senate.

“I’m humbled to have been elected to serve as the 48th president of the Student Government Association,” Megginson said. “My team and I have spent the past two months developing a robust and ambitious agenda and we’re excited to work with the newly elected Senate to get it implemented,” Megginson said. “I admire all he’s [Chatterjee’s] been able to accomplish as the 47th President, and I am immensely grateful for his year of service to our university. Put simply: I have some big shoes to fill.”

So begins the transitional period between the 47th and 48th SGA presidents. Through the month of March, Chatterjee and Megginson will be meeting with student leaders and administrators alike to ease the transition.

“SGA President Charlie Megginson is prepared to assume the duties of the office. He has measured judgment, as well as the ability to see situations from all angles and use that well- rounded perspective to cast out a vision for the future that people are invested in and inspired by,” Chatterjee said. “He is one of the most versatile members of our Duquesne community.”

Megginson’s platform focuses mainly on student involvement and representation within SGA. He hopes to create some type of forum that can incorporate a representative from every student organization on campus.

“Only once we ensure every student knows they have a voice at this university will the Student Government truly achieve its potential,” Megginson said.

Megginson noted that the ideas for his platform came from discussion with peers and listening to their ideas and concerns, as well as from the year he spent away from the SGA, observing their operations from the outside looking in. Megginson had spent the majority of the 47th Senate as non-member in order to focus on his role as President of the Delta Chi fraternity on campus.

Every position in this election was unopposed, which Megginson noted in a previous conversation with The Duke was “a real problem.” He hopes to increase student involvement within the SGA and between student organizations.

Megginson also hopes to remove the legislation that requires a 15 week (or one semester) membership to run for an SGA executive office. That would mean the only qualifications for a student to run would be good academic and behavioral standing and that the student is a full-time student (taking 12 or more credits).

“I want to start a conversation that includes the entire university community, not the slim margin of students who join the Student Government,” Megginson said.

He also wants to work to help strengthen the Diversity Committee which operates as part of the SGA. He wants to be sure the SGA reaches out to “previously unheard communities on this campus to ensure that every student has a voice.”

In addition to adding a forum that gives each student organization a representative, the 48th Senate will also be working to develop a platform for students to share ideas that could better the university.

“When I find a cause that has significant student support, I’m going to see what we can do about it, through our own organization or with support from the administration,” Megginson said.

While Megginson spoke of the highlights of the last year for SGA, such as expanding the book loan program, including students in academic review as well as establishing the career closet and food pantry, he hinted that not everything was running as it should be.

“The Student Government requires some serious structural and cultural change. The SGA that exists today is not the SGA that our student body deserves,” Megginson said. “I’m going to work with my administration and our colleagues in the Senate to change that. The behavior of some of our members has cast a dark shadow on our body, tainting and minimizing the great work we do.”

As part of his platform, Megginson noted that there needed to be “a complete culture change within the SGA.”

The first meeting with the new Senate will be held Sunday, March 17 at 7 p.m. in Room 203 of the Law School, and Megginson urges students to attend.