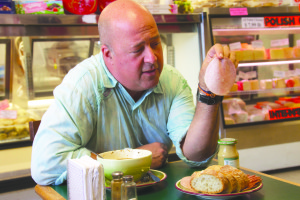 By: Carrie Garrison | The Duquesne Duke

Covering all of Pittsburgh’s beloved restaurants, Zimmern visited Cure, Wild Purveyors and Emil’s, among others. Of course Zimmern also visited the famed Primanti’s and Wholey’s, as well.

Nystrom was surprised that Zimmern would call their food “bizarre.” When she approached the camera crew they told her that they were featuring Pittsburgh’s relatively “normal” cuisine to “expand their viewership.”

Nystrom said the filming process was enjoyable. Zimmern was, “very pleasant and had a good sense of humor.”

“They made it really easy, it was a small crew and a light atmosphere,” Gordon said.

After arriving in Pittsburgh, Zimmern went cat fishing with Gordon in the North Shore by PNC Park.

After introducing Zimmern to cat fishing, Gordon took a few cat fish to cook and enjoy with Zimmern.

But, why are catfish a bizarre food?

“The bizarre fact is that anytime you talk about eating anything out of a river,” Gordon said. “It might be seen as bizarre seafood because people have a notion that the water is way too polluted to safely eat anything out of it, but that’s really not the case.”

According to Gordon, the river is actually rather clean, as acknowledged by the Pennsylvania fishing and boat commission.

The final course was found on Pittsburgh’s North Side at Max’s Allegheny Tavern. Specializing in German cuisine, the restaurant had the perfect dish for Zimmern.

Zimmern sought out this restaurant to sample a bransweiger sandwich, according to Erin Lawther bartender/manager.

“It’s probably the most bizarre thing we have,” Lawther said. “It’s your basic sandwich served on rye bread with bermuda onion.”

The sandwich is a German specialty made from liverwurst.

Bovalina didn’t seem to understand why the bransweiger would seem “bizarre”.

“It’s made out of pig’s liver ,” Bolavina said. “It looks like bologna.”

After devouring his way through Pittsburgh in his five-day film shooting, Zimmern visited another 19 or 20 cities to finish his filming of the seventh season of Bizarre Foods.