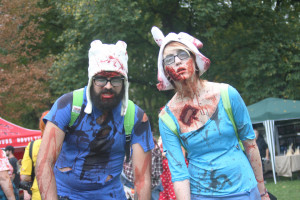 Moans and groans emulated from a once peaceful park in Lawrenceville last Saturday: voices of the undead.

Arsenal Park was the site of this year’s Pittsburgh Zombie Fest, an annual zombie enthusiast gathering. The event is in its eighth year and is held on World Zombie Day, the second Saturday in October, according to Mark Menold, event creator.

He said he started Zombie Fest “because it’s awesome. Something fun to do and to collect food for the food bank.”

This year’s event, with an estimated 3000 to 3,500 attendees, featured a brain eating contest (brains were made of sugar-free jello), an “Ugly pageant” (a beauty pageant for best zombie King and Queen), live local band performances, zombie-themed vendors and a taping of the It’s Alive Show, Menold’s horror comedy show that airs on WBGN.

In addition to the zombie aesthetic, the event also collects canned goods for the Greater Pittsburgh Community Food Bank. Since it’s first event, a zombie walk held at the Monroeville Mall in 2006, Pittsburgh Zombie Fest has collected 14,000 pounds of food at the events, according to Menold.

“It’s just an easy way [to collect],” Menold said. “When people come to a free event, they can bring food.”

Josh Ducar, 25 of Munhall and a student at the University of Pittsburgh., has been interested zombies since he saw Night of the Living Dead when he was 15. He came in his skate clothes, a tattered flannel and ripped jeans, looking like a standard zombie, his face adorned with fake blood and make-up.

“I went down to the party store, slapped on some make-up and had some fun,” Ducar said. 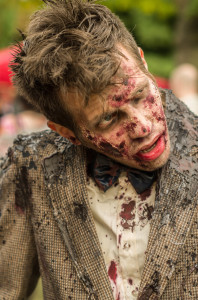 Hannah Wood, a third year student in the baking and pastry program at the Art Institue of Pittsburgh, dressed a little different, donning a white apron while carrying blood splattered cupcakes, a zombie baker.

The 21 year-old Saxonburg, PA native has been coming to Pittsburgh Zombie Fest for three years and has one simple reason for attending.

“I just like to come dress up,” she said.

One of the vendors that catered to the undead was Zombie In a Box, a $40 interactive fake wound that comes with directions and supplies to look like a zombie, created by John Matechen and wife Barabara.

The Matechens own Train4Real, a medical supply company specializing in realistic and interactive training aids, like pressure ulcers and wound enclosures.

“I thought ‘there has to be another use for these things,’” Matechen said, who was a zombie in George Romero’s Dawn of the Dead.

Another vendor, Kevin Kreiss, owner of The Living Dead Museum and Giftshop in Evans City, set-up a zombie laser tag on Arsenal Park’s baseball field.
Players could participate for a fee of $3 for zombies and $5 for shooters. The objective was for the shooter to eliminate the zombies before they reached a fake human body, set a top a folding table in the outfield.

“Something I’ve tried to do for years,” Kreiss said.

Although it’s popularity is not what it once was, according to Menold, but he sees Pittsburgh Zombie Fest’s place in this zombie day and age.

“It probably peaked a couple years ago. Since then, a lot of other zombie themed events [ have come about], so people are kind of spread out,” Menold said. “But this is still everyone’s favorite.”